Genetic variants at the SORT1 locus in humans, which cause increased SORT1 expression in the liver, are significantly associated with reduced plasma levels of LDL cholesterol and apolipoprotein B (apoB). However, the role of hepatic sortilin remains controversial, as genetic deletion of sortilin in mice has resulted in variable and conflicting effects on apoB secretion. Here, we found that Sort1-KO mice on a chow diet and several Sort1-deficient hepatocyte lines displayed no difference in apoB secretion. When these models were challenged with high-fat diet or ER stress, the loss of Sort1 expression resulted in a significant increase in apoB-100 secretion. Sort1-overexpression studies yielded reciprocal results. Importantly, carriers of SORT1 variant with diabetes had larger decreases in plasma apoB, TG, and VLDL and LDL particle number as compared with people without diabetes with the same variants. We conclude that, under basal nonstressed conditions, loss of sortilin has little effect on hepatocyte apoB secretion, whereas, in the setting of lipid loading or ER stress, sortilin deficiency leads to increased apoB secretion. These results are consistent with the directionality of effect in human genetics studies and suggest that, under stress conditions, hepatic sortilin directs apoB toward lysosomal degradation rather than secretion, potentially serving as a quality control step in the apoB secretion pathway in hepatocytes. 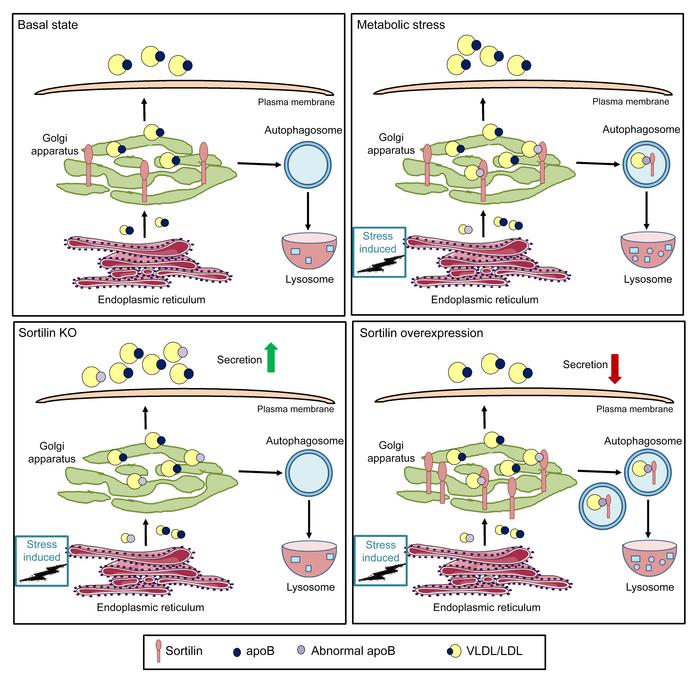