Fanconi anemia (FA) is the most prevalent inherited bone marrow failure (BMF) syndrome. Nevertheless, the pathophysiological mechanisms of BMF in FA have not been fully elucidated. Since FA cells are defective in DNA repair, we hypothesized that FA hematopoietic stem and progenitor cells (HSPCs) might express DNA damage–associated stress molecules such as natural killer group 2 member D ligands (NKG2D-Ls). These ligands could then interact with the activating NKG2D receptor expressed in cytotoxic NK or CD8+ T cells, which may result in progressive HSPC depletion. Our results indeed demonstrated upregulated levels of NKG2D-Ls in cultured FA fibroblasts and T cells, and these levels were further exacerbated by mitomycin C or formaldehyde. Notably, a high proportion of BM CD34+ HSPCs from patients with FA also expressed increased levels of NKG2D-Ls, which correlated inversely with the percentage of CD34+ cells in BM. Remarkably, the reduced clonogenic potential characteristic of FA HSPCs was improved by blocking NKG2D–NKG2D-L interactions. Moreover, the in vivo blockage of these interactions in a BMF FA mouse model ameliorated the anemia in these animals. Our study demonstrates the involvement of NKG2D–NKG2D-L interactions in FA HSPC functionality, suggesting an unexpected role of the immune system in the progressive BMF that is characteristic of FA. 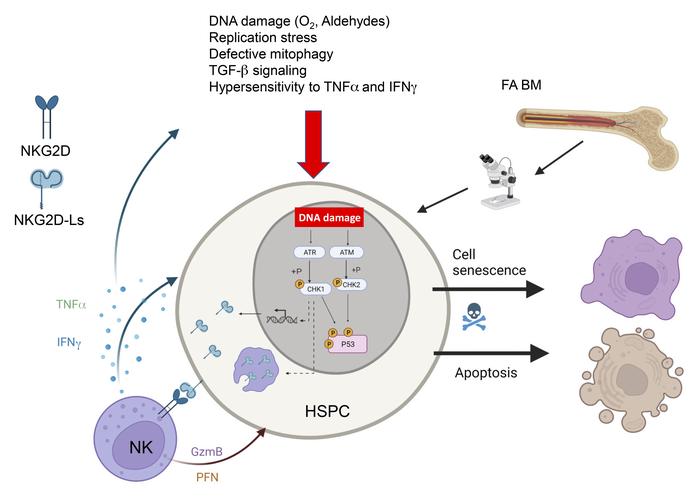