Identification of neoepitopes that are effective in cancer therapy is a major challenge in creating cancer vaccines. Here, using an entirely unbiased approach, we queried all possible neoepitopes in a mouse cancer model and asked which of those are effective in mediating tumor rejection and, independently, in eliciting a measurable CD8 response. This analysis uncovered a large trove of effective anticancer neoepitopes that have strikingly different properties from conventional epitopes and suggested an algorithm to predict them. It also revealed that our current methods of prediction discard the overwhelming majority of true anticancer neoepitopes. These results from a single mouse model were validated in another antigenically distinct mouse cancer model and are consistent with data reported in human studies. Structural modeling showed how the MHC I–presented neoepitopes had an altered conformation, higher stability, or increased exposure to T cell receptors as compared with the unmutated counterparts. T cells elicited by the active neoepitopes identified here demonstrated a stem-like early dysfunctional phenotype associated with effective responses against viruses and tumors of transgenic mice. These abundant anticancer neoepitopes, which have not been tested in human studies thus far, can be exploited for generation of personalized human cancer vaccines.

Single-cell RNA-Seq analysis of CD8+ PD-1+ TILs from mice immunized with a TRMN and a non-TRMN. 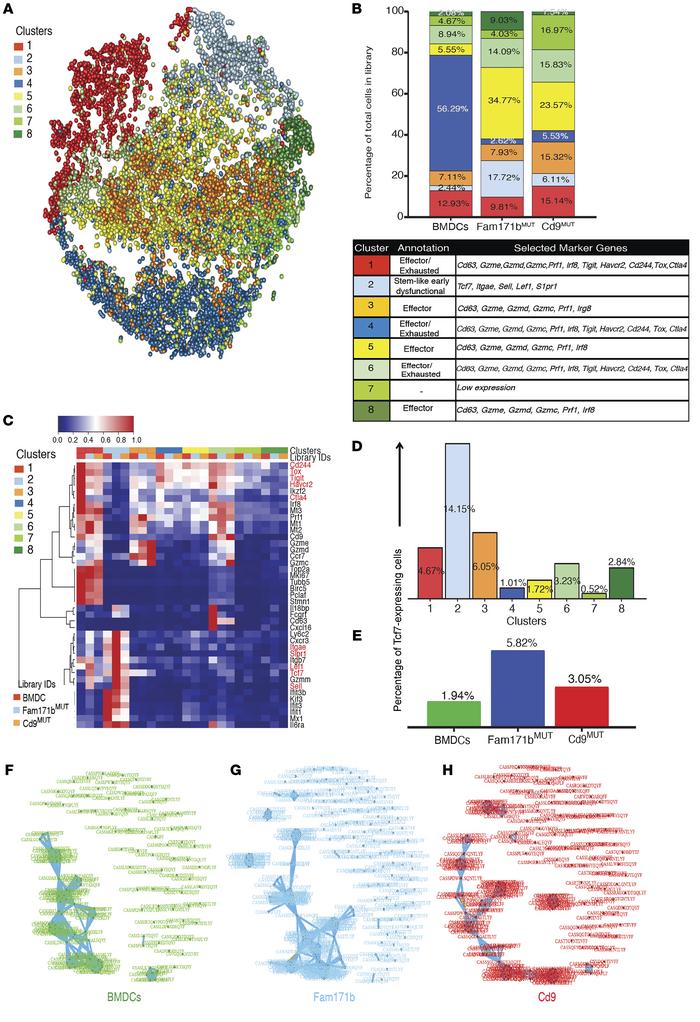 Mice ( = 3 per group) were immunized with unpulsed BMDCs or BMDCs pulsed with peptides FAM171bMUT (a TRMN) or Cd9MUT (a non-TRMN) and challenged with MC38-FABF. Tumors were harvested on day 25 after tumor challenge and live CD8+PD-1+ TILs isolated by FACS and sequenced by scRNA-Seq. Approximately 4400 CD8+PD-1+ TILs were analyzed in each library. () Three-dimensional t-SNE plot showing clustering based on top average TF-IDF genes. () Top: composition (distribution) plot showing percentage of cells in the 8 clusters along with respective annotations in unpulsed BMDCs, FAM171bMUT, and Cd9MUT libraries; bottom: table showing cluster annotation based on selected markers. () Summary heatmap of selected differentially expressed genes (threshold of differential expression as defined in Methods). ( and ) Percentage of Tcf7-expressing cells in each of the 8 clusters () or in each of the 3 libraries as indicated (). (–) Cluster results of applying GLIPH to the TCRs of each library as indicated. Each node is a TCR and each edge between the TCRs indicates the GLIPH-predicted shared specificity. Blue edges indicate shared local motif and orange edges indicate shared global similarity.