Tissue-based T cells are important effectors in the prevention and control of mucosal viral infections; less is known about tissue-based B cells. We demonstrate that B cells and antibody-secreting cells (ASCs) are present in inflammatory infiltrates in skin biopsy specimens from study participants during symptomatic herpes simplex virus 2 (HSV-2) reactivation and early healing. Both CD20+ B cells, most of which are antigen inexperienced based on their coexpression of IgD, and ASCs — characterized by dense IgG RNA expression in combination with CD138, IRF4, and Blimp-1 RNA — were found to colocalize with T cells. ASCs clustered with CD4+ T cells, suggesting the potential for crosstalk. HSV-2–specific antibodies to virus surface antigens were also present in tissue and increased in concentration during HSV-2 reactivation and healing, unlike in serum, where concentrations remained static over time. B cells, ASCs, and HSV-specific antibody were rarely detected in biopsies of unaffected skin. Evaluation of samples from serial biopsies demonstrated that B cells and ASCs followed a more migratory than resident pattern of infiltration in HSV-affected genital skin, in contrast to T cells. Together, these observations suggest the presence of distinct phenotypes of B cells in HSV-affected tissue; dissecting their role in reactivation may reveal new therapeutic avenues to control these infections.

Levels of HSV-2–specific antibody and total IgG follow B cell and ASC density. 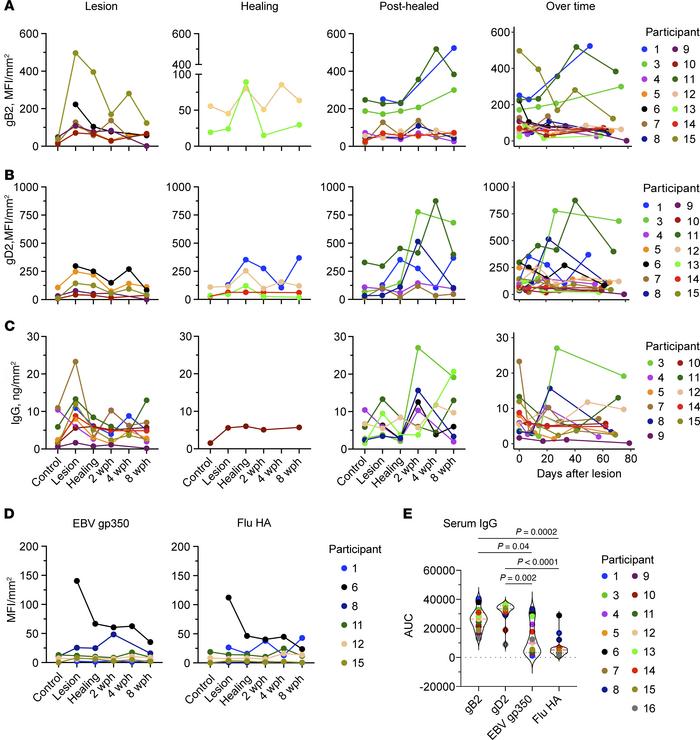 Concentration (expressed as MFI normalized to biopsy surface area [mm2]) of IgG to () gB2 ( 14), () gD2 ( 14), () total IgG (measured in ng/mm2; 13), and () control antigens EBV gp350 and Flu-HA ( 6) in tissue over time and shown by participants, with antibody peak at lesion (first column) or healing (second and third columns) time points. If a person did not have a clear peak at one time point, they were included in multiple graphs. Levels of antibody over time (by number of days after lesion biopsy) are in the fourth column. Missing data points (such as the arm control in participant 6) correspond to specimens with insufficient tissue to run the test. () Area under the titration curve in a serum measurement of antibody specific to each of these antigens from a single sample taken from each person at study entry ( 15). Serum titration curves are in , and AUC values are in . Statistical testing was by Friedman’s test with Dunn’s corrections for multiple comparisons. All measurements were performed in duplicate.