Lung-resident memory B cells (BRM cells) are elicited after influenza infections of mice, but connections to other pathogens and hosts — as well as their functional significance — have yet to be determined. We postulate that BRM cells are core components of lung immunity. To test this, we examined whether lung BRM cells are elicited by the respiratory pathogen pneumococcus, are present in humans, and are important in pneumonia defense. Lungs of mice that had recovered from pneumococcal infections did not contain organized tertiary lymphoid organs, but did have plasma cells and noncirculating memory B cells. The latter expressed distinctive surface markers (including CD69, PD-L2, CD80, and CD73) and were poised to secrete antibodies upon stimulation. Human lungs also contained B cells with a resident memory phenotype. In mice recovered from pneumococcal pneumonia, depletion of PD-L2+ B cells, including lung BRM cells, diminished bacterial clearance and the level of pneumococcus-reactive antibodies in the lung. These data define lung BRM cells as a common feature of pathogen-experienced lungs and provide direct evidence of a role for these cells in pulmonary antibacterial immunity. 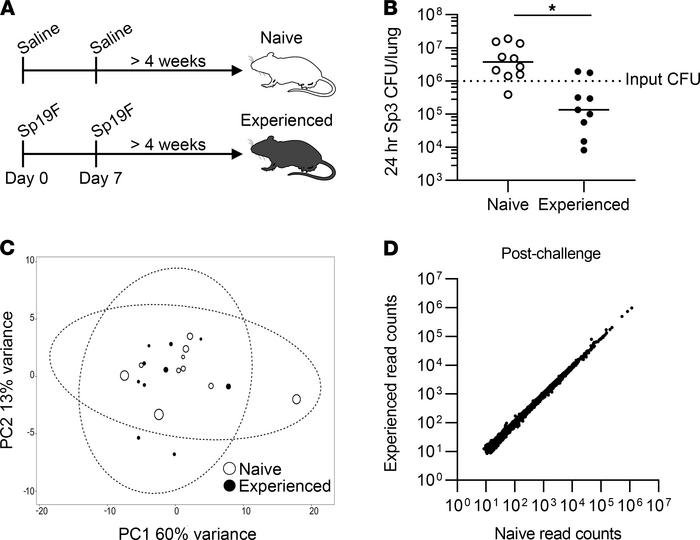 () B6 mice were exposed to i.t. or i.n. pneumococcus (Sp19F) or saline in the left lung lobe twice with a 1-week interval, then allowed to recover for at least 4 weeks, at which point they were referred to as “experienced” or “naive,” respectively. () Experienced and naive mice were challenged with i.t. pneumococcus (Sp3) for 24 hours before lung bacterial burdens were assessed (Mann-Whitney test, * = 0.0006). Principal component analysis () and read counts () from RNA-Seq of whole blood collected from the same naive and experienced mice as in prior to Sp3 challenge. Data point size in is proportional to the 24-hour lung Sp3 CFU of each mouse in . Each point in represents 1 gene.