The relationship between adiposity and metabolic health is well established. However, very little is known about the fat depot, known as paracardial fat (pCF), located superior to and surrounding the heart. Here, we show that pCF remodels with aging and a high-fat diet and that the size and function of this depot are controlled by alcohol dehydrogenase 1 (ADH1), an enzyme that oxidizes retinol into retinaldehyde. Elderly individuals and individuals with obesity have low ADH1 expression in pCF, and in mice, genetic ablation of Adh1 is sufficient to drive pCF accumulation, dysfunction, and global impairments in metabolic flexibility. Metabolomics analysis revealed that pCF controlled the levels of circulating metabolites affecting fatty acid biosynthesis. Also, surgical removal of the pCF depot was sufficient to rescue the impairments in cardiometabolic flexibility and fitness observed in Adh1-deficient mice. Furthermore, treatment with retinaldehyde prevented pCF remodeling in these animals. Mechanistically, we found that the ADH1/retinaldehyde pathway works by driving PGC-1α nuclear translocation and promoting mitochondrial fusion and biogenesis in the pCF depot. Together, these data demonstrate that pCF is a critical regulator of cardiometabolic fitness and that retinaldehyde and its generating enzyme ADH1 act as critical regulators of adipocyte remodeling in the pCF depot.

pCF is a unique fat depot that expands with aging and obesity. 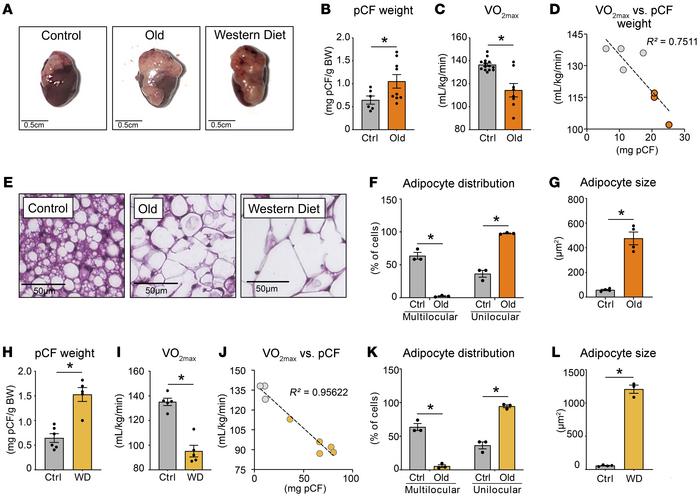