Diabetes mellitus (DM) is a risk factor for cancer. The role of DM-induced hyperglycemic (HG) stress in blood cancer is poorly understood. Epidemiologic studies show that individuals with DM are more likely to have a higher rate of mutations in genes found in pre-leukemic hematopoietic stem and progenitor cells (pre-LHSPCs) including TET2. TET2-mutant pre-LHSPCs require additional hits to evolve into full-blown leukemia and/or an aggressive myeloproliferative neoplasm (MPN). Intrinsic mutations have been shown to cooperate with Tet2 to promote leukemic transformation. However, the extrinsic factors are poorly understood. Using a mouse model carrying Tet2 haploinsufficiency to mimic the human pre-LHSPC condition and HG stress, in the form of an Ins2Akita/+ mutation, which induces hyperglycemia and type 1 DM, we show that the compound mutant mice developed a lethal form of MPN and/or acute myeloid leukemia (AML). RNA-Seq revealed that this was due in part to upregulation of proinflammatory pathways, thereby generating a feed-forward loop, including expression of the antiapoptotic, long noncoding RNA (lncRNA) Morrbid. Loss of Morrbid in the compound mutants rescued the lethality and mitigated MPN/AML. We describe a mouse model for age-dependent MPN/AML and suggest that hyperglycemia acts as an environmental driver for myeloid neoplasms, which could be prevented by reducing expression levels of the inflammation-related lncRNA Morrbid. 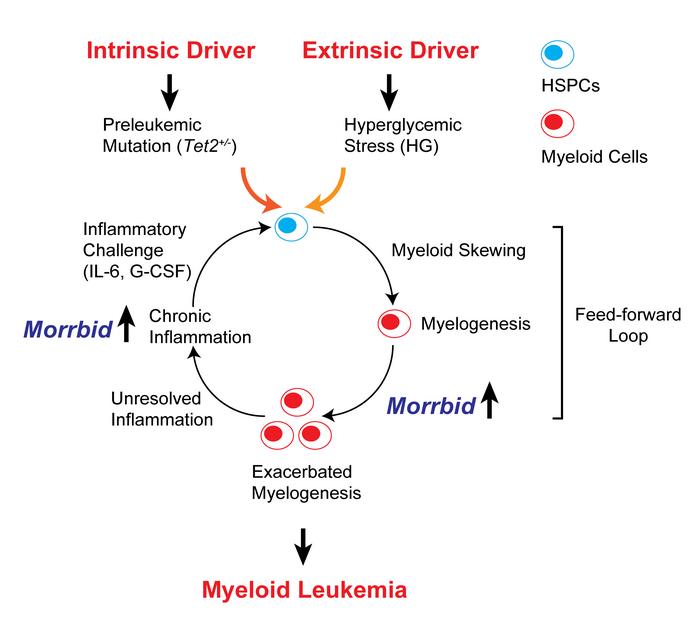