CA2 PNNs are inversely regulated by neuronal activity in vivo. 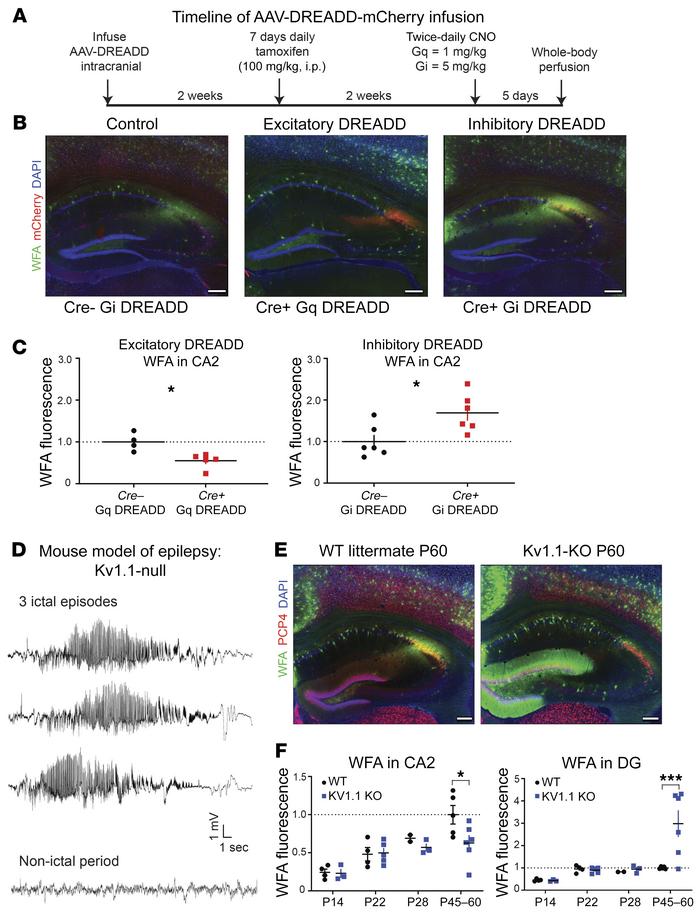 () Experimental timeline indicating the infusion of the DREADD-AAV into the hippocampus of ERT2+ and ERT2– mice. Two weeks later, tamoxifen injections were given for 7 days to induce selective expression in CA2 neurons. Two weeks after the last tamoxifen injection, the DREADD ligand CNO was given twice daily for 5 days (1 mg/kg for Gq DREADD, 5 mg/kg for Gi DREADD, s.c.). () Immunofluorescence shows mCherry-Gq DREADD (red) only in CA2 neurons. Representative images of WFA fluorescence intensity (green) in the hippocampus after 5 days of CNO treatment. Scale bars: 200 μm. () Quantification of WFA staining in CA2 showed a significant reduction in Gq DREADD–expressing animals compared with Cre– controls (* 0.011, unpaired 2-tailed test; 4 and 5 for Cre– and Cre+, respectively) and increase in CA2 of Gi DREADD–expressing animals compared with Cre– controls (* 0.0179, unpaired 2-tailed test; 6 for both Cre– and Cre+ groups). () Spontaneous electrographic seizures were detected in vivo in the hippocampus of a mouse model of epilepsy, the Kv1.1-null mouse. Examples of electrographic seizure activity detected by LFP recordings from the hippocampus during a 1-hour recording session in a P40 Kv1.1-null male mouse are shown. A period of non-ictal activity during the same recording session is shown for comparison. () Staining for PNN marker WFA (green) is reduced in CA2 of Kv1.1-null mice compared with WT littermates at P60. CA2 pyramidal neurons are identified with the CA2 marker PCP4 (red). Scale bars: 200 μm. () Normalized WFA fluorescence intensity was decreased at P45–60 in CA2 compared with WT; * 0.033 ( 4, 4, 3, and 5 for ages P14, P22, P28, and P45, respectively). In contrast, WFA fluorescence intensity was significantly greater in the dentate gyrus (DG) of Kv1.1-null mice compared with WT littermates at P45–60; *** 0.0002, Bonferroni’s post hoc test for pairwise comparison after 2-way ANOVA. Indicated are means ± SEM normalized to P45 WT group.