Dysregulation of autophagy in diabetic kidney disease (DKD) has been reported, but the underlying mechanism and its pathogenic role remain elusive. We show that autophagy was inhibited in DKD models and in human diabetic kidneys. Ablation of autophagy-related gene 7 (Atg7) from kidney proximal tubules led to autophagy deficiency and worse renal hypertrophy, tubular damage, inflammation, fibrosis, and albuminuria in diabetic mice, indicating a protective role of autophagy in DKD. Autophagy impairment in DKD was associated with the downregulation of unc-51–like autophagy-activating kinase 1 (ULK1), which was mediated by the upregulation of microRNA-214 (miR-214) in diabetic kidney cells and tissues. Ablation of miR-214 from kidney proximal tubules prevented a decrease in ULK1 expression and autophagy impairment in diabetic kidneys, resulting in less renal hypertrophy and albuminuria. Furthermore, blockade of p53 attenuated miR-214 induction in DKD, leading to higher levels of ULK1 and autophagy, accompanied by an amelioration of DKD. Compared with nondiabetic samples, renal biopsies from patients with diabetes showed induction of p53 and miR-214, associated with downregulation of ULK1 and autophagy. We found a positive correlation between p53/miR-214 and renal fibrosis, but a negative correlation between ULK1/LC3 and renal fibrosis in patients with diabetes. Together, these results identify the p53/miR-214/ULK1 axis in autophagy impairment in diabetic kidneys, pinpointing possible therapeutic targets for DKD. 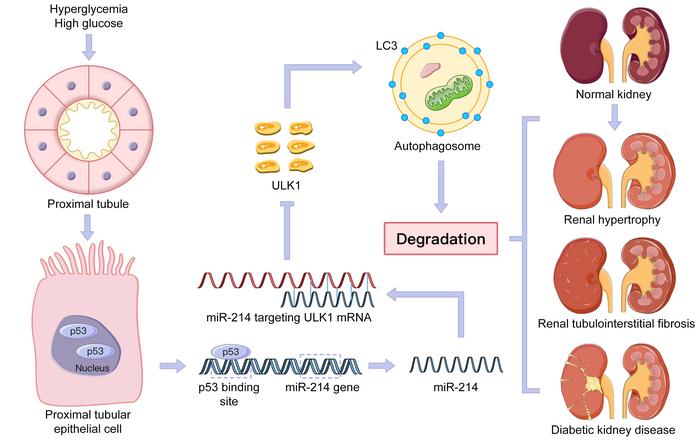