Delayed ischemic neurological deficit (DIND) is a major driver of adverse outcomes in patients with aneurysmal subarachnoid hemorrhage (aSAH), defining an unmet need for therapeutic development. Cell-free hemoglobin that is released from erythrocytes into the cerebrospinal fluid (CSF) is suggested to cause vasoconstriction and neuronal toxicity, and correlates with the occurrence of DIND. Cell-free hemoglobin in the CSF of patients with aSAH disrupted dilatory NO signaling ex vivo in cerebral arteries, which shifted vascular tone balance from dilation to constriction. We found that selective removal of hemoglobin from patient CSF with a haptoglobin-affinity column or its sequestration in a soluble hemoglobin-haptoglobin complex was sufficient to restore physiological vascular responses. In a sheep model, administration of haptoglobin into the CSF inhibited hemoglobin-induced cerebral vasospasm and preserved vascular NO signaling. We identified 2 pathways of hemoglobin delocalization from CSF into the brain parenchyma and into the NO-sensitive compartment of small cerebral arteries. Both pathways were critical for hemoglobin toxicity and were interrupted by the large hemoglobin-haptoglobin complex that inhibited spatial requirements for hemoglobin reactions with NO in tissues. Collectively, our data show that compartmentalization of hemoglobin by haptoglobin provides a novel framework for innovation aimed at reducing hemoglobin-driven neurological damage after subarachnoid bleeding. 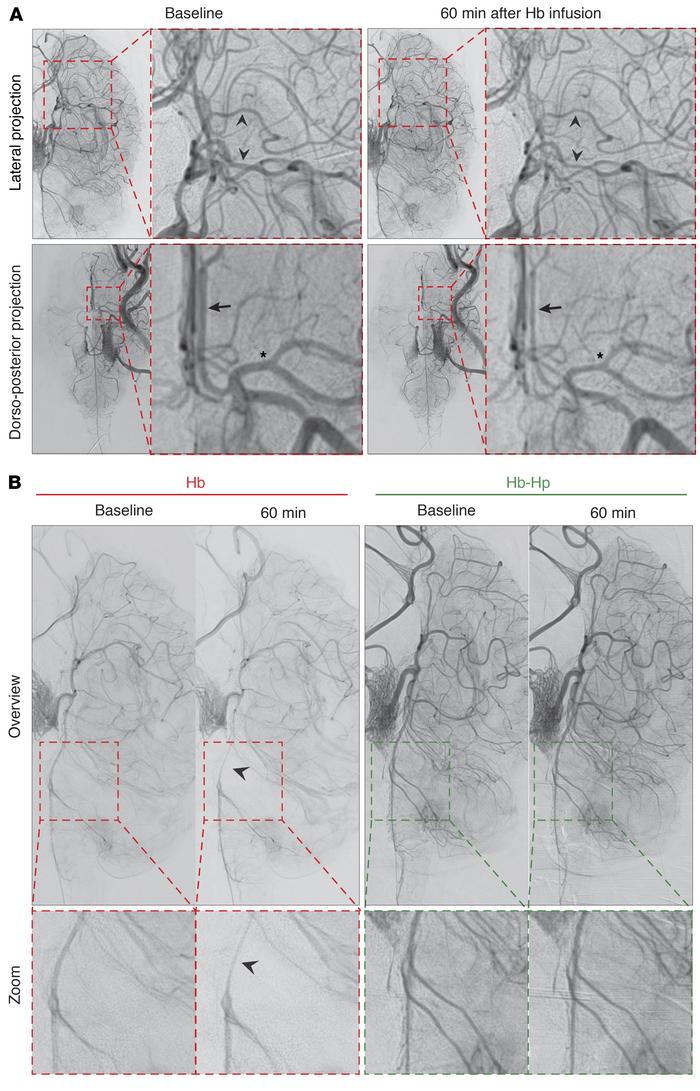 () Angiograms illustrating segmental vasospasms in major vascular territories, including the middle cerebral artery in the lateral projection (arrowheads, upper panel), the anterior cerebral artery (arrow, lower panel), and the middle cerebral artery (asterisk, lower panel) in the dorsoventral projection, 60 minutes after Hb infusion. The demonstrated angiograms are from the same experiment shown in . (Identical images are shown in and for the dorso-posterior projections at baseline). () Comparison of illustrative digital subtraction angiography in lateral projection of 2 sheep 60 minutes after infusion of Hb (left) or Hb-haptoglobin complexes (right). Segmental vasospasms of the basilar artery (arrow) were apparent 60 minutes after infusion of Hb, whereas no segmental vasospasms could be detected in animals infused with Hb-haptoglobin complexes. DSA images were obtained with a ×1.5 magnification.