Increased rates of locoregional recurrence are observed in patients with basal-like breast cancer (BC) despite the use of radiation therapy (RT); therefore, approaches that result in radiosensitization of basal-like BC are critically needed. Using patients’ tumor gene expression data from 4 independent data sets, we correlated gene expression with recurrence to find genes significantly correlated with early recurrence after RT. The highest-ranked gene, TTK, was most highly expressed in basal-like BC across multiple data sets. Inhibition of TTK by both genetic and pharmacologic methods enhanced radiosensitivity in multiple basal-like cell lines. Radiosensitivity was mediated, at least in part, through persistent DNA damage after treatment with TTK inhibition and RT. Inhibition of TTK impaired homologous recombination (HR) and repair efficiency, but not nonhomologous end-joining, and decreased the formation of Rad51 foci. Reintroduction of wild-type TTK rescued both radioresistance and HR repair efficiency after TTK knockdown; however, reintroduction of kinase-dead TTK did not. In vivo, TTK inhibition combined with RT led to a significant decrease in tumor growth in both heterotopic and orthotopic, including patient-derived xenograft, BC models. These data support the rationale for clinical development of TTK inhibition as a radiosensitizing strategy for patients with basal-like BC, and efforts toward this end are currently underway.

TTK expression correlates with BC recurrence and independently predicts LRFS. 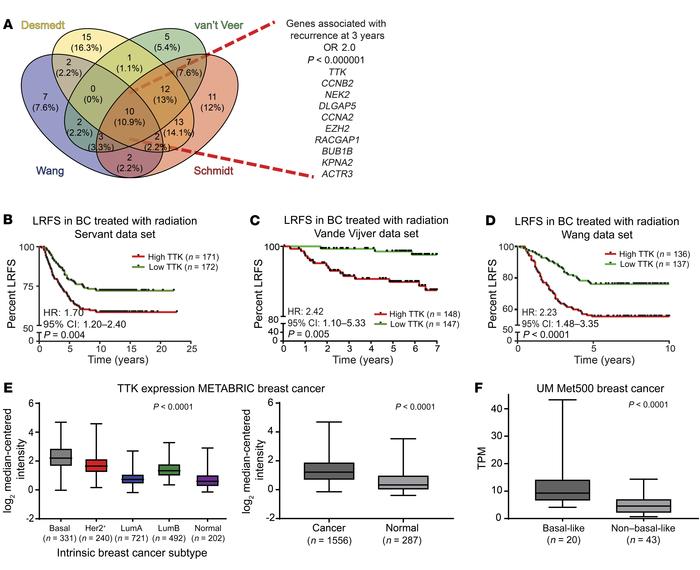 () Four BC data sets (Desmedt, van ‘t Veer, Wang, and Schmidt) were used to identify genes associated with early recurrence (within 3 years) (OR >2.0; < 1.0 × 10–6). (–) Kaplan-Meier LRFS analysis of 3 independent data sets: Servant (), Vande Vijver (), and Wang () demonstrated that patients with higher-than-the-median expression of TTK had significantly higher rates of LR after radiation compared with patients with lower-than-the-median TTK expression. () TTK was overexpressed in basal-like BC compared with expression in other BC subtypes ( < 0.0001) and was overexpressed in BC compared with healthy tissue ( < 0.0001) in the METABRIC data set. () TTK was overexpressed in basal-like BC compared with non–basal-like BC, using transcripts per million (TPM) measurement, in the University of Michigan’s institutional data set (Met500) ( < 0.0001). A 2-sided Student’s test and a 1-way ANOVA were used for statistical analyses. Error bars represent SD.