Catecholamines released by sympathetic nerves can activate adrenergic receptors present on nearly every cell type, including myeloid-derived suppressor cells (MDSCs). Using in vitro systems, murine tumor models in wild-type and genetically modified (β2-AR–/–) mice, and adoptive transfer approaches, we found that the degree of β2-AR signaling significantly influences MDSC frequency and survival in tumors and other tissues. It also modulates their expression of immunosuppressive molecules such as arginase-I and PD-L1 and alters their ability to suppress the proliferation of T cells. The regulatory functions of β2-AR signaling in MDSCs were also found to be dependent upon STAT3 phosphorylation. Moreover, we observed that the β2-AR–mediated increase in MDSC survival is dependent upon Fas-FasL interactions, and this is consistent with gene expression analyses, which reveal a greater expression of apoptosis-related genes in β2-AR–/– MDSCs. Our data reveal the potential of β2-AR signaling to increase the generation of MDSCs from both murine and human peripheral blood cells and that the immunosuppressive function of MDSCs can be mitigated by treatment with β-AR antagonists, or enhanced by β-AR agonists. This strongly supports the possibility that reducing stress-induced activation of β2-ARs could help to overcome immune suppression and enhance the efficacy of immunotherapy and other cancer therapies.

β2-AR activation during chronic stress increases MDSC accumulation in the spleen and tumor. 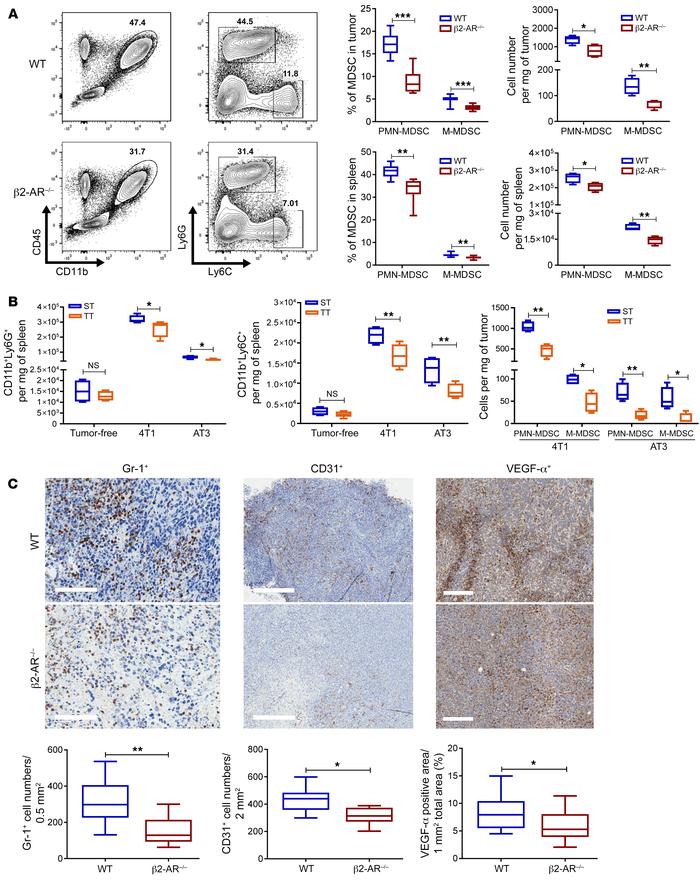