Expression of GFP throughout the posterior retina and RPE 2 weeks after suprachoroidal or subretinal injection of AAV8.GFP in rats. 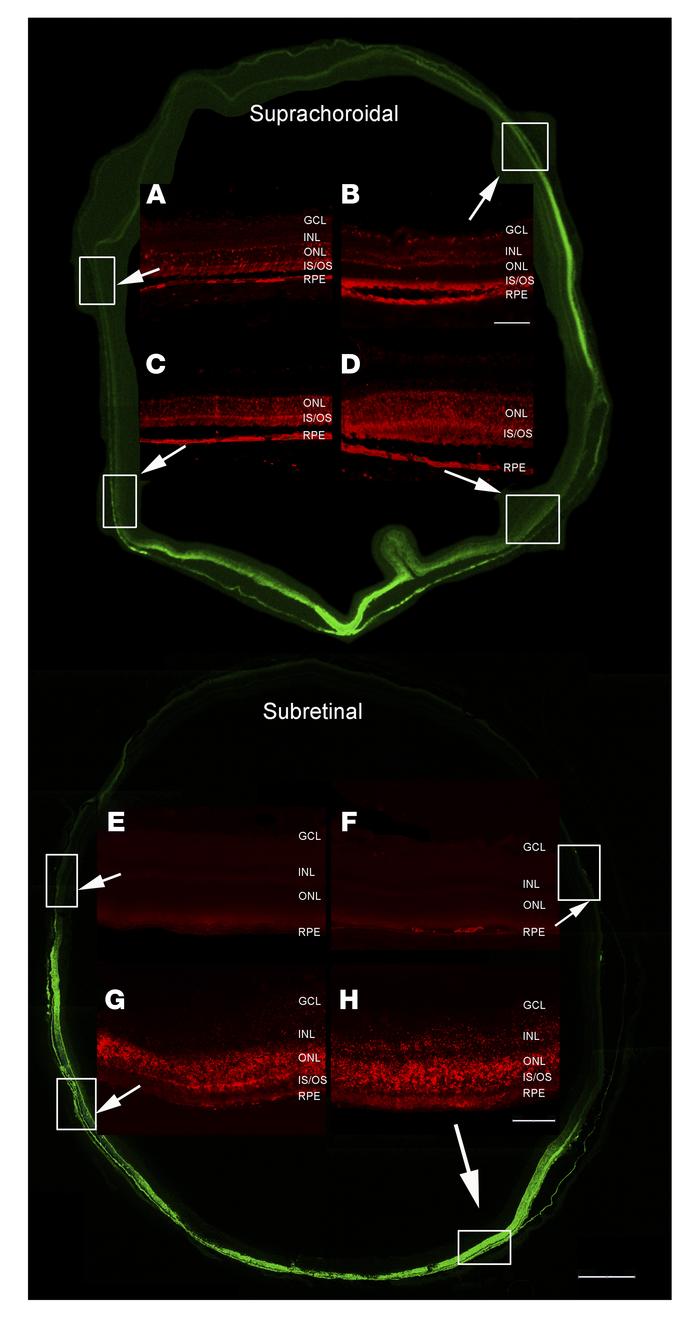 Two weeks after suprachoroidal injection of 2.85 × 1010 GCs of AAV8.GFP in rats, a transverse section showed more intense fluorescence in the retina on the side of the eye where the injection was performed (bottom), but was detectable around the entire circumference of the eye. The section was immunohistochemically stained with anti-GFP (red), and magnified views of the boxed regions on the side opposite the injection site ( and ) or on the same side ( and ) are shown. () In this region remote from the injection, there is strong GFP expression in some but not all RPE cells. Almost all photoreceptor inner segments (IS) and outer segments (OS) contain GFP, but few photoreceptor cell bodies in the outer nuclear layer (ONL). () In this second remote region, there are high levels of GFP in the RPE cells and photoreceptor IS and OS, but not cell bodies. Some cells in the inner nuclear layer (INL) and GCL contain GFP ( and ). In the 2 regions on the injected side of the eye, there are high levels of GFP in RPE cells and photoreceptor IS, OS, and cell bodies. There is a small artifactual retinal fold adjacent to the boxed area shown in . Two weeks after subretinal injection of 2.85 × 1010 GCs of AAV8.GFP, there was strong GFP fluorescence and anti-GFP staining in RPE, photoreceptor IS, OS, and cell bodies in half of the eye where the retina had been detached by the vector ( and ), but not the other half ( and ). Scale bars: 100 μm for high power; 500 μm for low power.