Membrane repair is essential to cell survival. In skeletal muscle, injury often associates with plasma membrane disruption. Additionally, muscular dystrophy is linked to mutations in genes that produce fragile membranes or reduce membrane repair. Methods to enhance repair and reduce susceptibility to injury could benefit muscle in both acute and chronic injury settings. Annexins are a family of membrane-associated Ca2+-binding proteins implicated in repair, and annexin A6 was previously identified as a genetic modifier of muscle injury and disease. Annexin A6 forms the repair cap over the site of membrane disruption. To elucidate how annexins facilitate repair, we visualized annexin cap formation during injury. We found that annexin cap size positively correlated with increasing Ca2+ concentrations. We also found that annexin overexpression promoted external blebs enriched in Ca2+ and correlated with a reduction of intracellular Ca2+ at the injury site. Annexin A6 overexpression reduced membrane injury, consistent with enhanced repair. Treatment with recombinant annexin A6 protected against acute muscle injury in vitro and in vivo. Moreover, administration of recombinant annexin A6 in a model of muscular dystrophy reduced serum creatinine kinase, a biomarker of disease. These data identify annexins as mediators of membrane-associated Ca2+ release during membrane repair and annexin A6 as a therapeutic target to enhance membrane repair capacity.

Ca2+-dependent annexin repair cap recruitment at the site of injury. 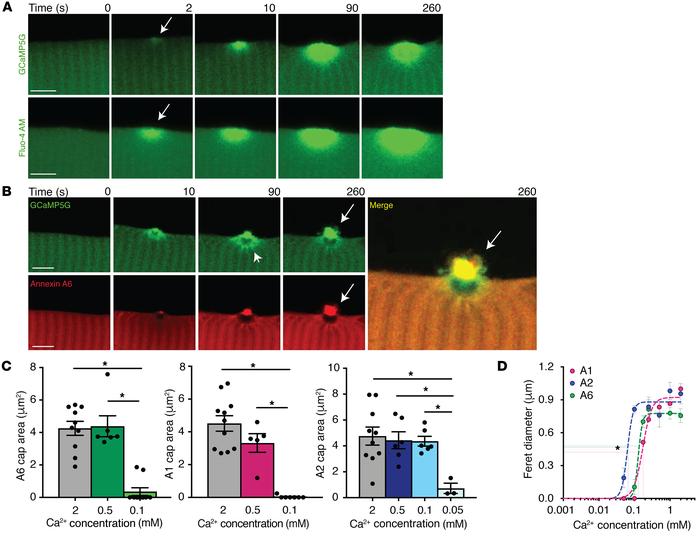 Myofibers were generated to express the Ca2+ indicator GCaMP5G (green), and time-lapse single-slice images were assessed at time points after membrane disruption. () GCaMP5G fluorescence was present at the site of injury, at 2 seconds (arrow), indicating the presence of Ca2+ immediately after damage at the site of injury (top panel). These data were validated with a non–protein-based Ca2+ indicator, Fluo-4 AM (green, bottom panel). () Time-lapse images of myofibers coelectroporated with GCaMP5G and annexin A6-tdTomato (A6, red). GCaMP5G fluorescence was present at the site of injury localized around the annexin A6–free zone (arrowhead) and at the annexin A6 cap (arrow). GCaMP5G colocalized (merge, yellow, arrow) with the annexin A6 repair cap. Scale bars: 5 μm. () Myofibers expressing fluorescently tagged annexins A1, A2, or A6 were injured at multiple Ca2+ concentrations. Annexin A1 and A6 repair cap size was reduced at 0.1 mM Ca2+ compared with 2 mM and 0.5 mM. Annexin A2 repair cap area was significantly reduced at 0.05 mM Ca2+ compared with 2 mM, 0.5 mM, and 0.1 mM Ca2+. () Cap kinetics were plotted as cap Feret diameter over a range of Ca2+ concentrations. Annexin A2 had a statistically significant leftward shift in (1/2), followed by annexin A6 and then A1. Data are expressed as mean ± SEM. Differences were tested by 1-way ANOVA with Tukey’s multiple-comparisons test (). * < 0.05 ( = 5 myofibers per condition).