Engagement of either hFcγRIIA or hFcγRIIIA is necessary and sufficient for tumor clearance, mediated by sLeA-targeting Abs with an hIgG1 Fc. 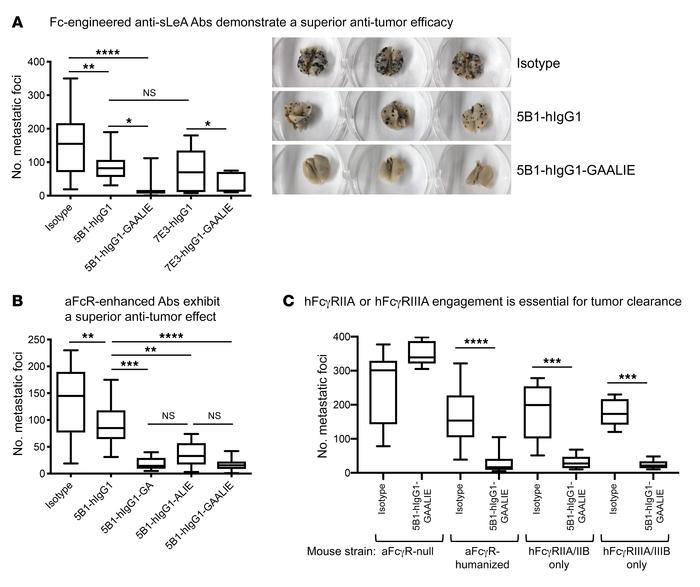 Mice were inoculated i.v. with 5 × 105 B16-FUT3 tumor cells. One hundred micrograms of anti-sLeA Abs or isotype-matched control Abs was administered i.p. on days 1, 4, 7, and 11. Fourteen days after inoculation, mice were euthanized, lungs were excised and fixed, and metastatic foci were counted. * < 0.05, ** < 0.01, *** < 0.001, **** < 0.0001 (1-way ANOVA with Bonferroni’s post hoc test). For all panels, the box extends from the 25th to 75th percentile, the line within the box represents the median value, and the whiskers correspond to the 5th to 95th percentile. () Fc-engineered anti-sLeA Ab variants demonstrate superior antitumor efficacy. FcγR-humanized mice were treated with clones 5B1 or 7E3, hIgG1 or hIgG1-GAALIE with G236A/A330L/I332E mutations. Data were pooled from = 2–3 experiments, ≥ 13/group, except for 7E3-hIgG1-GAALIE ( = 7). () 5B1-hIgG1 Abs with enhanced binding affinity for hFcγRIIA, or hFcγRIIIA, or both demonstrate a superior antitumor effect. FcγR-humanized mice were treated with Fc variants 5B1-hIgG1, 5B1-hIgG1-GA with a G236A mutation, 5B1-hIgG1-ALIE with A330L/I332E mutations, or 5B1-hIgG1-GAALIE with G236A/A330L/I332E mutations. Data were pooled from = 2–4 experiments. ≥ 12/group. () hFcγRIIA or hFcγRIIIA engagement is essential for efficient tumor clearance of sLeA+ tumors. Activating FcγR-null (aFcγR-null, γ chain–KO), FcγR-humanized, hFcγRIIA/IIB–transgenic, and hFcγRIIIA/IIIB–transgenic mice were treated with the Ab 5B1-hIgG1-GAALIE with G236A/A330L/I332E mutations. Data were pooled from ≥ 2 experiments for aFcγR-null and FcγR-humanized mice, ≥ 12/group. For hFcγRIIA/IIB–transgenic and hFcγRIIIA/IIIB–transgenic, = 5–8/group.