Inflammation plays a critical role in the development of severe neonatal morbidities. Myeloid-derived suppressor cells (MDSCs) were recently implicated in the regulation of immune responses in newborns. Here, we report that the presence of MDSCs and their functional activity in infants are closely associated with the maturity of newborns and the presence of lactoferrin (LF) in serum. Low amounts of MDSCs at birth predicted the development of severe pathology in preterm infants — necrotizing enterocolitis (NEC). In vitro treatment of newborn neutrophils and monocytes with LF converted these cells to MDSCs via the LRP2 receptor and activation of the NF-κB transcription factor. Decrease in the expression of LRP2 was responsible for the loss of sensitivity of adult myeloid cells to LF. LF-induced MDSCs (LF-MDSCs) were effective in the treatment of newborn mice with NEC, acting by blocking inflammation, resulting in increased survival. LF-MDSCs were more effective than treatment with LF protein alone. In addition to affecting NEC, LF-MDSCs demonstrated potent ability to control ovalbumin-induced (OVA-induced) lung inflammation, dextran sulfate sodium–induced (DSS-induced) colitis, and concanavalin A–induced (ConA-induced) hepatitis. These results suggest that cell therapy with LF-MDSCs may provide potent therapeutic benefits in infants with various pathological conditions associated with dysregulated inflammation.

Therapeutic effect of LF-MDSCs in the model of NEC. 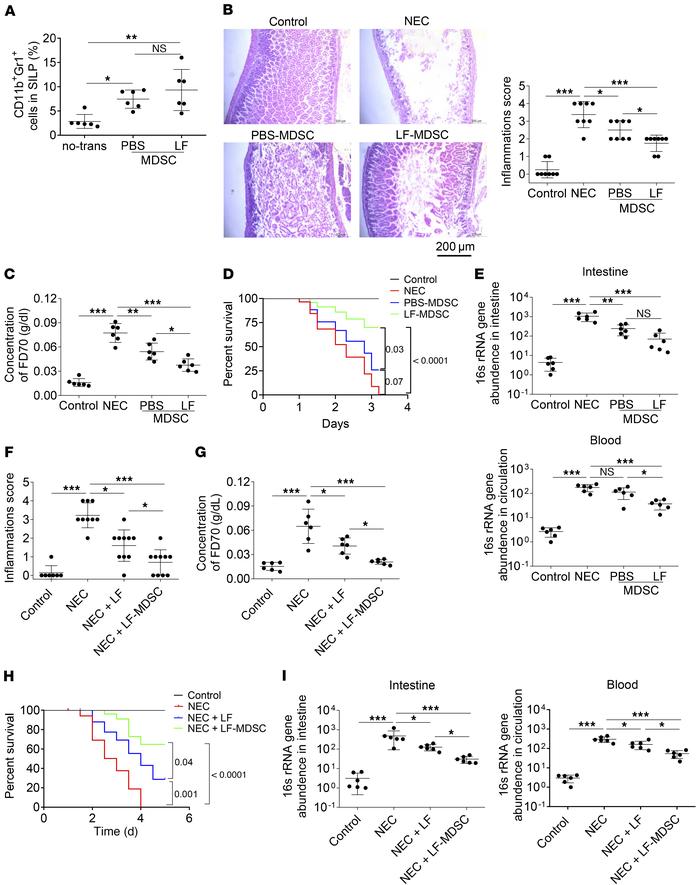