A common variant in the RAB27A gene in adults was recently found to be associated with the fractional exhaled nitric oxide level, a marker of eosinophilic airway inflammation. The small GTPase Rab27 is known to regulate intracellular vesicle traffic, although its role in allergic responses is unclear. We demonstrated that exophilin-5, a Rab27-binding protein, was predominantly expressed in both of the major IL-33 producers, lung epithelial cells, and the specialized IL-5 and IL-13 producers in the CD44hiCD62LloCXCR3lo pathogenic Th2 cell population in mice. Exophilin-5 deficiency increased stimulant-dependent damage and IL-33 secretion by lung epithelial cells. Moreover, it enhanced IL-5 and IL-13 production in response to TCR and IL-33 stimulation from a specific subset of pathogenic Th2 cells that expresses a high level of IL-33 receptor, which exacerbated allergic airway inflammation in a mouse model of asthma. Mechanistically, exophilin-5 regulates extracellular superoxide release, intracellular ROS production, and phosphoinositide 3-kinase activity by controlling intracellular trafficking of Nox2-containing vesicles, which seems to prevent the overactivation of pathogenic Th2 cells mediated by IL-33. This is the first report to our knowledge to establish the significance of the Rab27-related protein exophilin-5 in the development of allergic airway inflammation, and provides insights into the pathophysiology of asthma.

Exacerbation of allergic lung inflammation in -KO mice is completely inhibited by lack of IL-33. 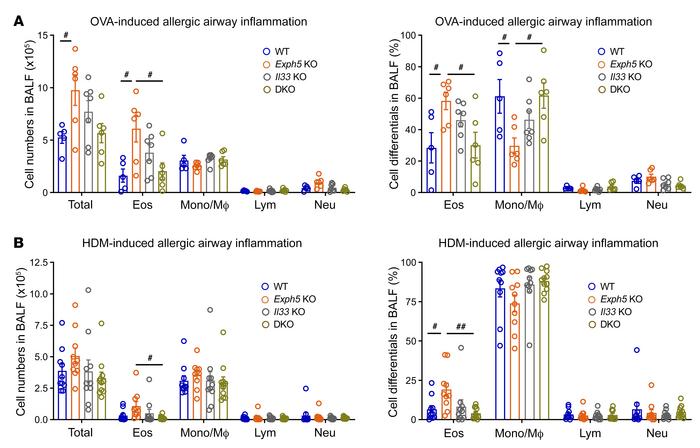