Aberrant, neovascular retinal blood vessel growth is a vision-threatening complication in ischemic retinal diseases. It is driven by retinal hypoxia frequently caused by capillary nonperfusion and endothelial cell (EC) loss. We investigated the role of EC apoptosis in this process using a mouse model of ischemic retinopathy, in which vessel closure and EC apoptosis cause capillary regression and retinal ischemia followed by neovascularization. Protecting ECs from apoptosis in this model did not prevent capillary closure or retinal ischemia. Nonetheless, it prevented the clearance of ECs from closed capillaries, delaying vessel regression and allowing ECs to persist in clusters throughout the ischemic zone. In response to hypoxia, these preserved ECs underwent a vessel sprouting response and rapidly reassembled into a functional vascular network. This alleviated retinal hypoxia, preventing subsequent pathogenic neovascularization. Vessel reassembly was not limited by VEGFA neutralization, suggesting it was not dependent on the excess VEGFA produced by the ischemic retina. Neutralization of ANG2 did not prevent vessel reassembly, but did impair subsequent angiogenic expansion of the reassembled vessels. Blockade of EC apoptosis may promote ischemic tissue revascularization by preserving ECs within ischemic tissue that retain the capacity to reassemble a functional network and rapidly restore blood supply. 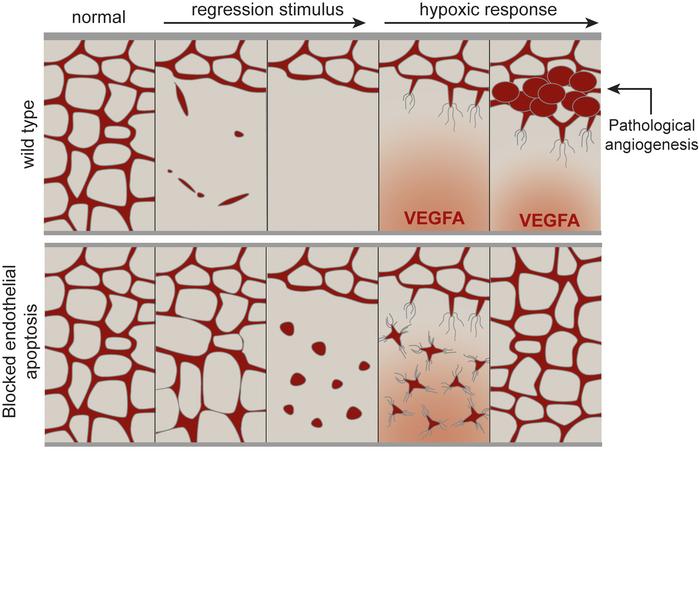