BACKGROUND In the Joslin Medalist Study (Medalists), we determined whether significant associations exist between β cell function and pathology and clinical characteristics.METHODS Individuals with type 1 diabetes (T1D) for 50 or more years underwent evaluation including HLA analysis, basal and longitudinal autoantibody (AAb) status, and β cell function by a mixed-meal tolerance test (MMTT) and a hyperglycemia/arginine clamp procedure. Postmortem analysis of pancreases from 68 Medalists was performed. Monogenic diabetes genes were screened for the entire cohort.RESULTS Of the 1019 Medalists, 32.4% retained detectable C-peptide levels (>0.05 ng/mL, median: 0.21 ng/mL). In those who underwent a MMTT (n = 516), 5.8% responded with a doubling of baseline C-peptide levels. Longitudinally (n = 181, median: 4 years), C-peptide levels increased in 12.2% (n = 22) and decreased in 37% (n = 67) of the Medalists. Among those with repeated MMTTs, 5.4% (3 of 56) and 16.1% (9 of 56) had waxing and waning responses, respectively. Thirty Medalists with baseline C-peptide levels of 0.1 ng/mL or higher underwent the clamp procedure, with HLA–/AAb– and HLA+/AAb– Medalists being most responsive. Postmortem examination of pancreases from 68 Medalists showed that all had scattered insulin-positive cells; 59 additionally had few insulin-positive cells within a few islets; and 14 additionally had lobes with multiple islets with numerous insulin-positive cells. Genetic analysis revealed that 280 Medalists (27.5%) had monogenic diabetes variants; in 80 (7.9%) of these Medalists, the variants were classified as “likely pathogenic” (rare exome variant ensemble learner [REVEL] >0.75).CONCLUSION All Medalists retained insulin-positive β cells, with many responding to metabolic stimuli even after 50 years of T1D. The Medalists were heterogeneous with respect to β cell function, and many with HLA+ diabetes risk alleles also had monogenic diabetes variants, indicating the importance of genetic testing for clinically diagnosed T1D.FUNDING Funding for this work was provided by the Dianne Nunnally Hoppes Fund; the Beatson Pledge Fund; the NIH, National Institute of Diabetes and Digestive and Kidney Diseases (NIDDK); and the American Diabetes Association (ADA). 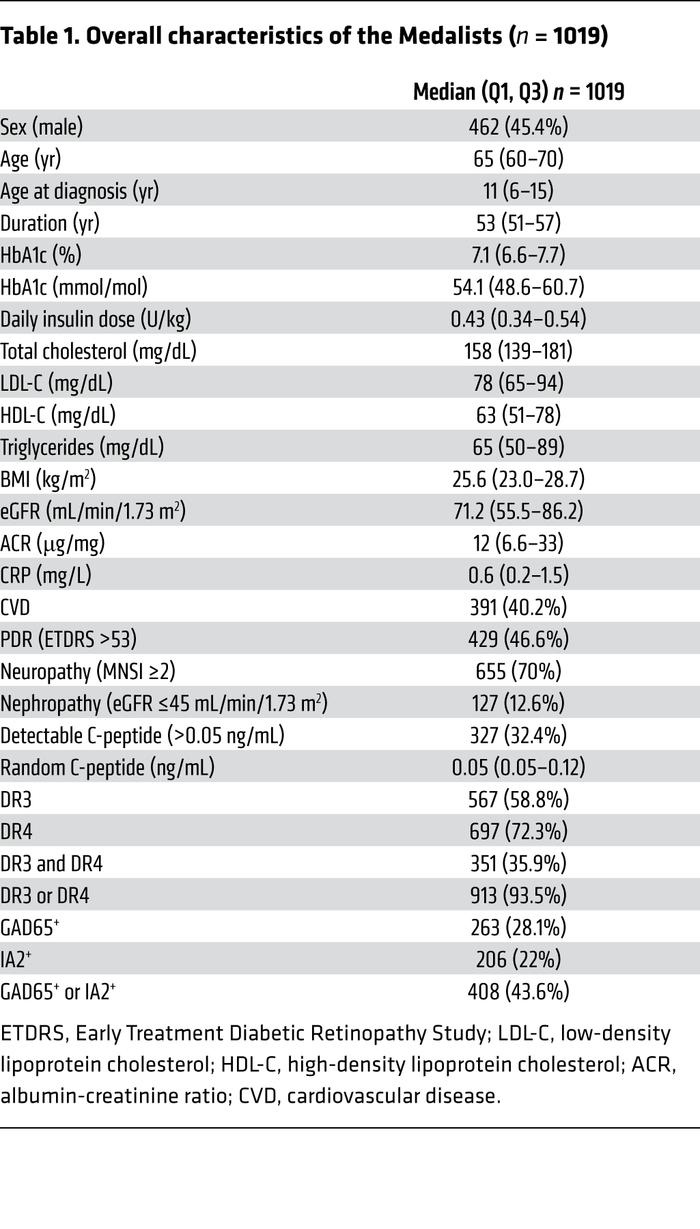 Overall characteristics of the Medalists ( = 1019)