EGFR-mutated lung adenocarcinoma patients treated with gefitinib and osimertinib show a therapeutic benefit limited by the appearance of secondary mutations, such as EGFRT790M and EGFRC797S. It is generally assumed that these secondary mutations render EGFR completely unresponsive to the inhibitors, but contrary to this, we uncovered here that gefitinib and osimertinib increased STAT3 phosphorylation (p-STAT3) in EGFRT790M and EGFRC797S tumoral cells. Interestingly, we also found that concomitant Notch inhibition with gefitinib or osimertinib treatment induced a p-STAT3–dependent strong reduction in the levels of the transcriptional repressor HES1. Importantly, we showed that tyrosine kinase inhibitor–resistant tumors, with EGFRT790M and EGFRC797S mutations, were highly responsive to the combined treatment of Notch inhibitors with gefitinib or osimertinib, respectively. Finally, in patients with EGFR mutations treated with tyrosine kinase inhibitors, HES1 protein levels increased during relapse and correlated with shorter progression-free survival. Therefore, our results offer a proof of concept for an alternative treatment to chemotherapy in lung adenocarcinoma osimertinib-treated patients after disease progression. 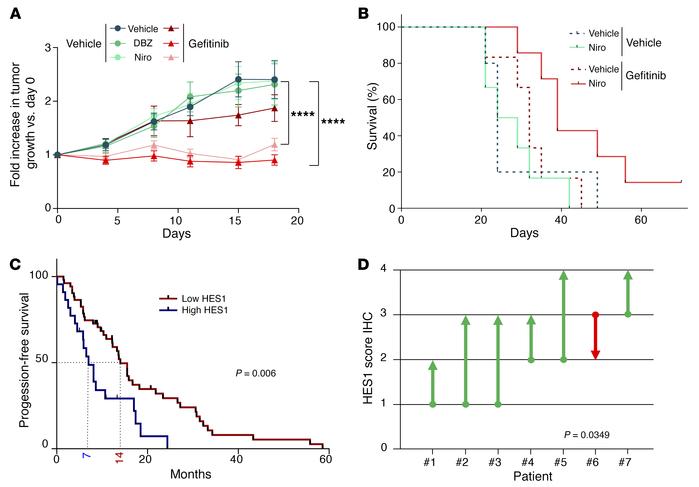