Inflammatory destruction of iron-rich myelin is characteristic of multiple sclerosis (MS). Although iron is needed for oligodendrocytes to produce myelin during development, its deposition has also been linked to neurodegeneration and inflammation, including in MS. We report perivascular iron deposition in multiple sclerosis lesions that was mirrored in 72 lesions from 13 marmosets with experimental autoimmune encephalomyelitis. Iron accumulated mainly inside microglia/macrophages from 6 weeks after demyelination. Consistently, expression of transferrin receptor, the brain’s main iron-influx protein, increased as lesions aged. Iron was uncorrelated with inflammation and postdated initial demyelination, suggesting that iron is not directly pathogenic. Iron homeostasis was at least partially restored in remyelinated, but not persistently demyelinated, lesions. Taken together, our results suggest that iron accumulation in the weeks after inflammatory demyelination may contribute to lesion repair rather than inflammatory demyelination per se. 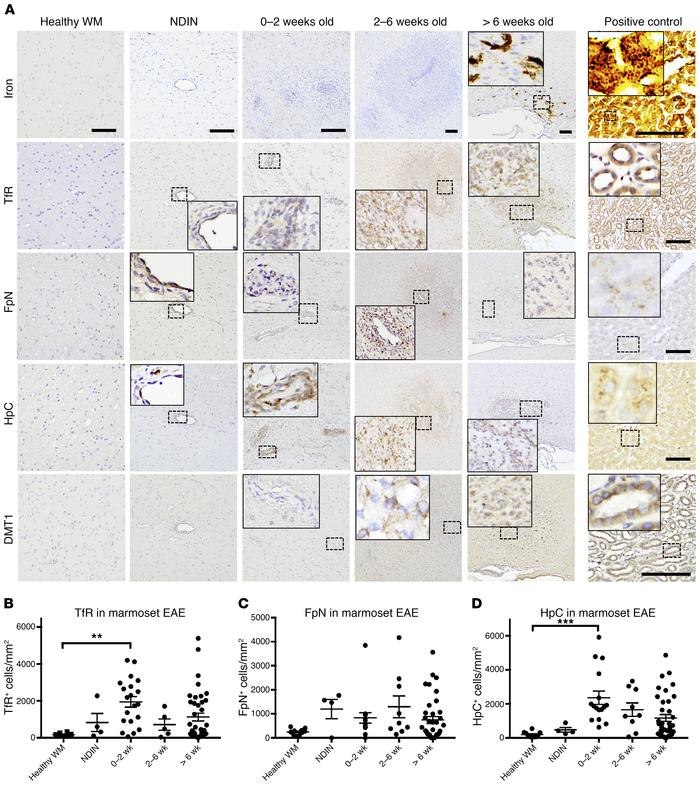 () Marmoset EAE lesions, categorized by age, and histopathology of iron and iron regulators, including transferrin receptor (TfR), ferroportin (FpN), hepcidin (HpC), and divalent metal transporter 1 (DMT1). Staining of serial sections from representative lesions shows that the expression level of all of these proteins increased before the accumulation of iron (>6 weeks). (–) Quantification of TfR, FpN, and HpC expression level, with standard error of the mean. Dots represent individual lesions. Counterstain: hematoxylin. Scale bars: 100 μm and are constant within each column of the figure (except for the positive control). Positive controls: marmoset liver for iron, FpN, and HpC; marmoset kidney for TfR and DMT1. Lesions selected from marmosets 6, 7, 8, and 9. ** < 0.01; *** < 0.001 (ANOVA multiple comparisons test).