Vascular development in the mammalian retina is a paradigm for CNS vascular development in general, and its study is revealing fundamental mechanisms that explain the efficacy of antiangiogenic therapies in retinal vascular disease. During development of the mammalian retina, hypoxic astrocytes are hypothesized to secrete VEGF, which attracts growing endothelial cells as they migrate radially from the optic disc. However, published tests of this model using astrocyte-specific deletion of Vegf in the developing mouse retina appear to contradict this theory. Here, we report that selectively eliminating Vegf in neonatal retinal astrocytes with a Gfap-Cre line that recombines with approximately 100% efficiency had no effect on proliferation or radial migration of astrocytes, but completely blocked radial migration of endothelial cells, strongly supporting the hypoxic astrocyte model. Using additional Cre driver lines, we found evidence for essential and partially redundant actions of retina-derived (paracrine) and astrocyte-derived (autocrine) VEGF in controlling astrocyte proliferation and migration. We also extended previous studies by showing that HIF-1α in retinal neurons and HIF-2α in Müller glia play distinct roles in retinal vascular development and disease, adding to a growing body of data that point to the specialization of these 2 hypoxia-sensing transcription factors.

Distinctive vascular phenotypes result from eliminating , , or both and in developing retinal progenitors or Müeller glia. 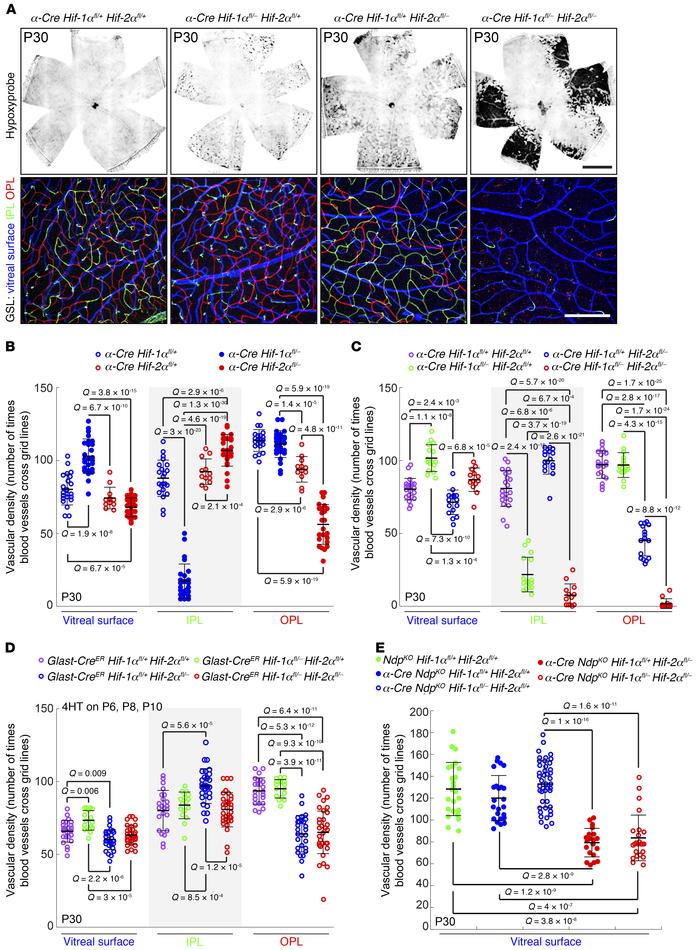 () Top panels, P30 whole retina flat mounts from the indicated genotypes stained for Hypoxyprobe (black), which accumulates in hypoxic regions of retina. The retina (left panel) is a phenotypically normal control. Scale bar, 1 mm. Bottom panels, high-magnification images from the peripheral retina, where the transgene is expressed, showing GSL-stained vasculature. The GSL signal is color coded by depth with the vitreal surface in blue, the IPL in green, and the OPL in red. Scale bar: 200 μm. (–) Quantification of the vascular density in the peripheral retina for each of the 3 vascular layers (vitreal surface, IPL, and OPL) following ( and ) or - () mediated deletion of the indicated and/or alleles. Each symbol represents the quantification from one 500-μm × 500-μm square area. For activation of CreER in the mice, each mouse received 3 doses of 200-μg 4HT, delivered at P6, P8, and P10. In this and all other figures; data show the mean ± SD, and values were calculated with a 2-tailed unequal variance test adjusted for multiple comparisons using the method of Benjamini and Hochberg (). () Quantification of the surface vascular density in the peripheral retina following –mediated recombination of the indicated and/or alleles in an background. is X-linked and the retinas studied here were hemizygous for the KO allele. Each symbol represents the quantification from one 500-μm × 500-μm square area.