Interstitial cells of Cajal (ICCs) are pacemaker cells in the intestine, and their function can be compromised by loss of C-KIT expression. Macrophage activation has been identified in intestine affected by Hirschsprung disease–associated enterocolitis (HAEC). In this study, we examined proinflammatory macrophage activation and explored the mechanisms by which it downregulates C-KIT expression in ICCs in colon affected by HAEC. We found that macrophage activation and TNF-α production were dramatically increased in the proximal dilated colon of HAEC patients and 3-week-old Ednrb–/– mice. Moreover, ICCs lost their C-KIT+ phenotype in the dilated colon, resulting in damaged pacemaker function and intestinal dysmotility. However, macrophage depletion or TNF-α neutralization led to recovery of ICC phenotype and restored their pacemaker function. In isolated ICCs, TNF-α–mediated phosphorylation of p65 induced overexpression of microRNA-221 (miR-221), resulting in suppression of C-KIT expression and pacemaker currents. We also identified a TNF-α/NF-κB/miR-221 pathway that downregulated C-KIT expression in ICCs in the colon affected by HAEC. These findings suggest the important roles of proinflammatory macrophage activation in a phenotypic switch of ICCs, representing a promising therapeutic target for HAEC. 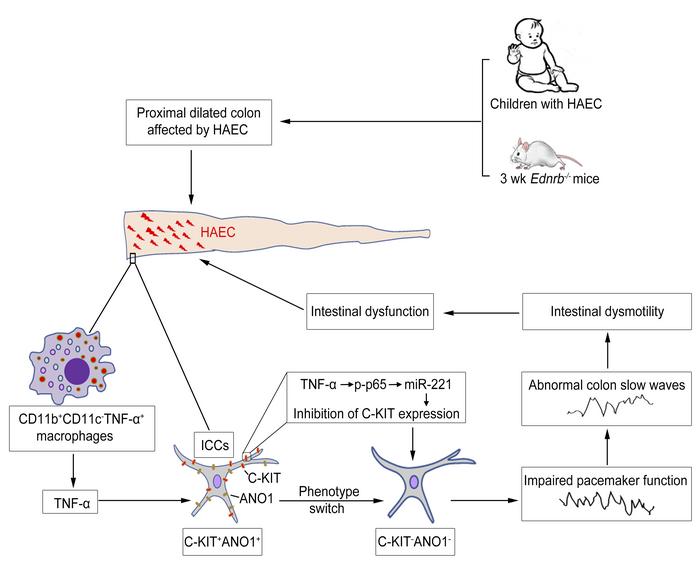