Spondyloarthritis (SpA) represents a family of inflammatory diseases of the spine and peripheral joints. Ankylosing spondylitis (AS) is the prototypic form of SpA in which progressive disease can lead to fusion of the spine. Therapeutically, knowledge of type 3 immunity has translated into the development of IL-23– and IL-17A–blocking antibodies for the treatment of SpA. Despite being able to provide symptomatic control, the current biologics do not prevent the fusion of joints in AS patients. Thus, there is an unmet need for disease-modifying drugs. Genetic studies have linked the Janus kinase TYK2 to AS. TYK2 is a mediator of type 3 immunity through intracellular signaling of IL-23. Here, we describe and characterize a potentially novel small-molecule inhibitor of TYK2 that blocked IL-23 signaling in vitro and inhibited disease progression in animal models of SpA. The effect of the inhibitor appears to be TYK2 specific, using TYK2-inactive mice, which further revealed a duality in the induction of IL-17A and IL-22 by IL-23. Specifically, IL-22 production was TYK2/JAK2/STAT3 dependent, while IL-17A was mostly JAK2 dependent. Finally, we examined the effects of AS-associated TYK2 SNPs on TYK2 expression and function and correlated them with AS disease progression. This work provides evidence that TYK2 inhibitors have great potential as an orally delivered therapeutic for SpA. 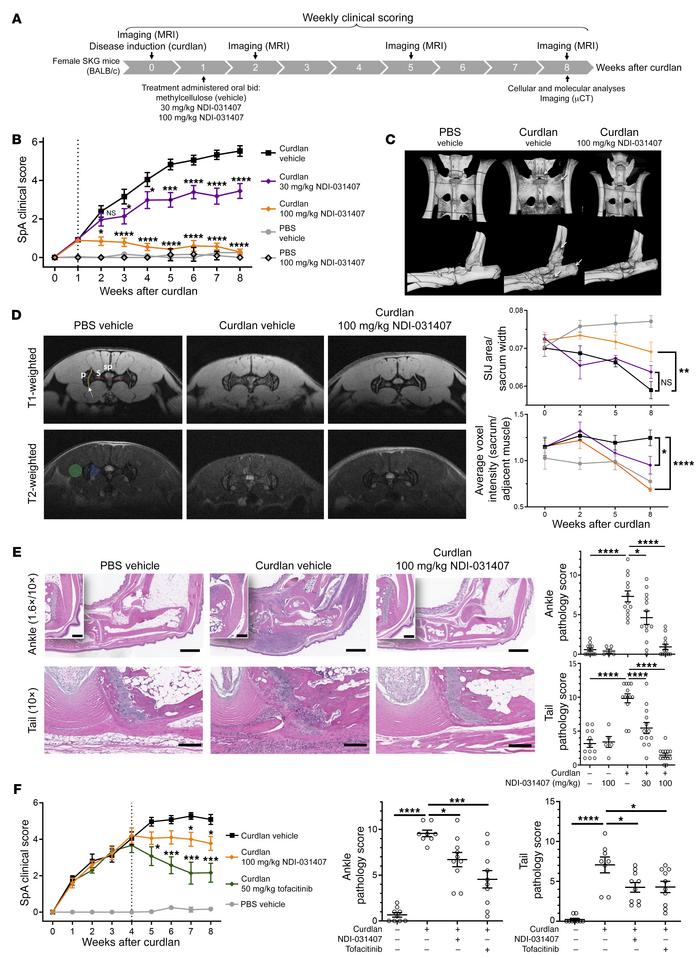 Female SKG mice were treated with curdlan to induce SpA-like disease, or with PBS as disease-free controls. () Overview of experiment and readouts for –. At 1 week after curdlan treatment, mice began treatment with NDI-031407 at the indicated dosages by gavage twice daily. () Mice ( = 12–13 per group) were scored weekly for SpA symptoms (blepharitis, arthritis, and dermatitis). () Representative postmortem μCT images of pelvis (dorsal view) and ankles (lateral view) from mice in the indicated groups. Arrows point to sites of entheseal erosion. () MRI of the sacroiliac joint (SIJ; coronal plane) in live mice. T1 weighing was used to assess SIJ area as a ratio to sacrum width. SP, spinal cord; S, sacrum; P, pelvis; red line, sacrum width; yellow area/white arrow, SIJ space. Scale bar: 5 mm. T2 weighing was used to assess bone marrow edema in the sacrum (blue area) normalized to adjacent muscle (green area). Representative images at 8 weeks after disease induction. Pooled data from 5 mice per group. Group colors are the same as in . () H&E staining and scoring of tissue at 8 weeks after curdlan. Scale bars: 1 mm for 1.6× and 200 μm for 10×. () SKG mice were treated from 4 weeks after curdlan (therapeutically) with NDI-031407 or tofacitinib for 4 weeks ( = 9–10 per group). Data in , , and were assessed by 2-way ANOVA, with time considered as dependent variable. Means of curdlan/NDI-031407–treated animals compared with curdlan/vehicle-treated controls at each time point by Dunnett’s post hoc test. For pathology scoring ( and ), each point represents a single mouse; disease-free vs. curdlan/vehicle animals were analyzed by unpaired test, NDI-031407–treated vs. vehicle-treated animals by 1-way ANOVA with Dunnett’s post hoc test. * < 0.05, ** < 0.01, *** < 0.001, **** < 0.0001.