Immune response to therapeutic enzymes poses a detriment to patient safety and treatment outcome. Enzyme replacement therapy (ERT) is a standard therapeutic option for some types of mucopolysaccharidoses, including Morquio A syndrome caused by N-acetylgalactosamine-6-sulfate sulfatase (GALNS) deficiency. Current protocols tolerize patients using cytotoxic immunosuppressives, which can cause adverse effects. Here we show development of tolerance in Morquio A mice via oral delivery of peptide or GALNS for 10 days prior to ERT. Our results show that using an immunodominant peptide (I10) or the complete GALNS enzyme to orally induce tolerance to GALNS prior to ERT resulted in several improvements to ERT in mice: (a) decreased splenocyte proliferation after in vitro GALNS stimulation, (b) modulation of the cytokine secretion profile, (c) decrease in GALNS-specific IgG or IgE in plasma, (d) decreased GAG storage in liver, and (e) fewer circulating immune complexes in plasma. This model could be extrapolated to other lysosomal storage disorders in which immune response hinders ERT. 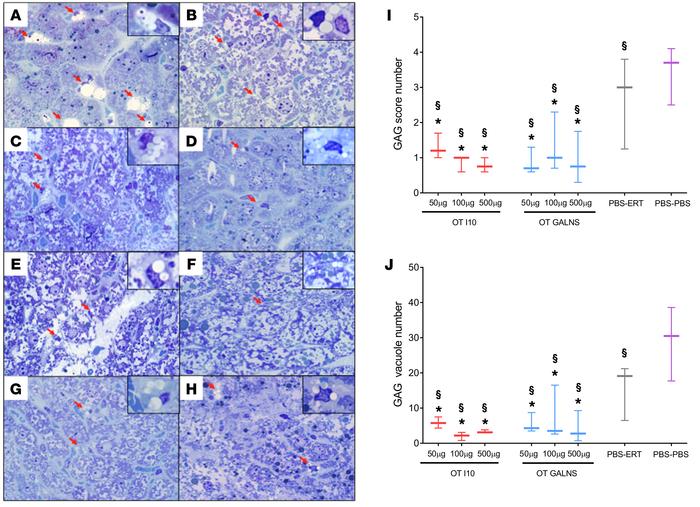 Light microscopic findings of toluidine blue–stained, 1-μm-thick sections of mouse liver from () PBS control group, () ERT nontolerized group, and groups tolerized with peptide I10 (, 50 μg; , 100 μg; and , 500 μg) or GALNS (, 50 μg; , 100 μg; and , 500 μg) prior to ERT. The red arrows and insets show GAG aggregates. Accumulation of GAGs was significantly higher in control groups ( and ) and much less in treated groups ( and ). Wild-type mouse cells do not have any GAG accumulation because they have a functional GALNS enzyme. Original magnification, ×100 and ×400 (insets). The number of cells with cytoplasmic vacuoles () as well as total number of vacuoles () were counted in 8 random microscopic high-power fields (×100). A score from 0 to 5 (0 = none, 1 = 1, 2 = 2–3, 3 = 4–5, 4 = 6–7, and 5 = 7) was assigned according to the number of cells containing vacuoles per high-power field. Quantitative data are represented as a box-and-whisker plot, with bounds from 25th to 75th percentile, median line, and whiskers ranging from 5th and 95th percentile values. * < 0.05, Benjamini and Hochberg adjusted, for differences between tolerized and nontolerized (PBS-ERT) mice. § < 0.05, Benjamini and Hochberg adjusted, for differences between ERT-treated mice and untreated (PBS-PBS) mice.