Mobilized peripheral blood has become the primary source of hematopoietic stem and progenitor cells (HSPCs) for stem cell transplantation, with a 5-day course of granulocyte colony-stimulating factor (G-CSF) as the most common regimen used for HSPC mobilization. The CXCR4 inhibitor plerixafor is a more rapid mobilizer, yet not potent enough when used as a single agent, thus emphasizing the need for faster acting agents with more predictable mobilization responses and fewer side effects. We sought to improve hematopoietic stem cell transplantation by developing a new mobilization strategy in mice through combined targeting of the chemokine receptor CXCR2 and the very late antigen 4 (VLA4) integrin. Rapid and synergistic mobilization of HSPCs along with an enhanced recruitment of true HSCs was achieved when a CXCR2 agonist was coadministered in conjunction with a VLA4 inhibitor. Mechanistic studies revealed involvement of CXCR2 expressed on BM stroma in addition to stimulation of the receptor on granulocytes in the regulation of HSPC localization and egress. Given the rapid kinetics and potency of HSPC mobilization achieved by the VLA4 inhibitor and CXCR2 agonist combination in mice compared with currently approved HSPC mobilization methods, the combination represents an exciting potential strategy for clinical development in the future.

CXCR2 expression in both the hematopoietic and nonhematopoietic (stromal) compartment contributes to tGro-induced mobilization. 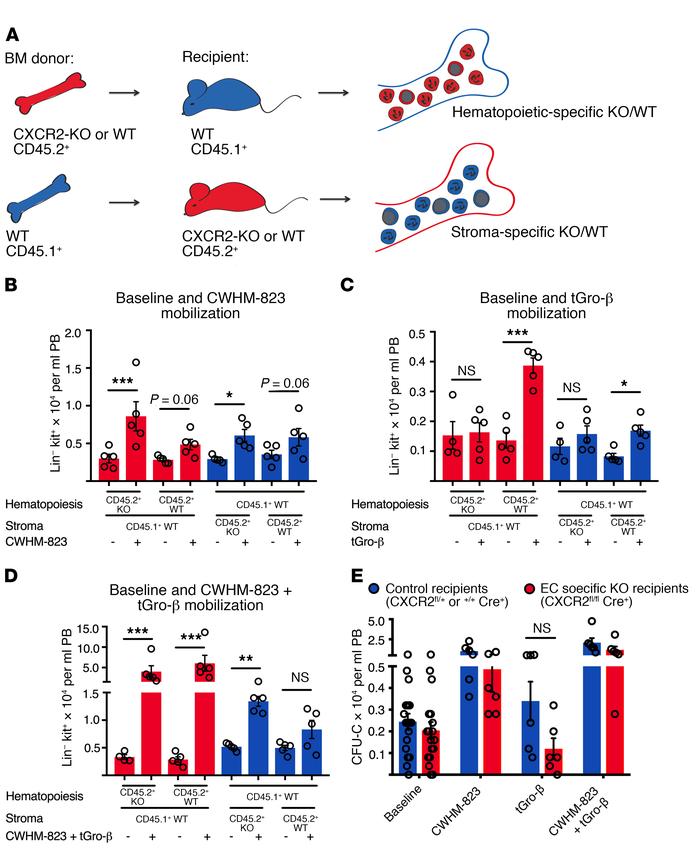