The study of human B cell tolerance has been hampered by difficulties in identifying a sizable population of autoreactive B lymphocytes whose fate could be readily determined. Hypothesizing that B cells expressing intrinsically autoreactive antibodies encoded by the VH4-34 heavy chain gene (VH4-34 cells) represent such a population, we tracked VH4-34 cells in healthy individuals. Here, we show that naive VH4-34 cells are positively selected and mostly restricted to the follicular mantle zone. Subsequently, these cells are largely excluded from the germinal centers and underrepresented in the memory compartment. In healthy donors but not in patients with systemic lupus erythematosus (SLE), these cells are prevented from differentiating into antibody-producing plasma cells. This blockade can be overcome ex vivo using cultures of naive and memory VH4-34 cells in the presence of CD70, IL-2, and IL-10. VH4-34 cells may therefore represent an experimentally useful surrogate for autoantibody transgenes and should prove valuable in studying human B cell tolerance in a physiological, polyclonal environment. Our initial results suggest that both positive and negative selection processes participate in the maintenance of tolerance in autoreactive human B cells at multiple checkpoints throughout B cell differentiation and that at least some censoring mechanisms are faulty in SLE. 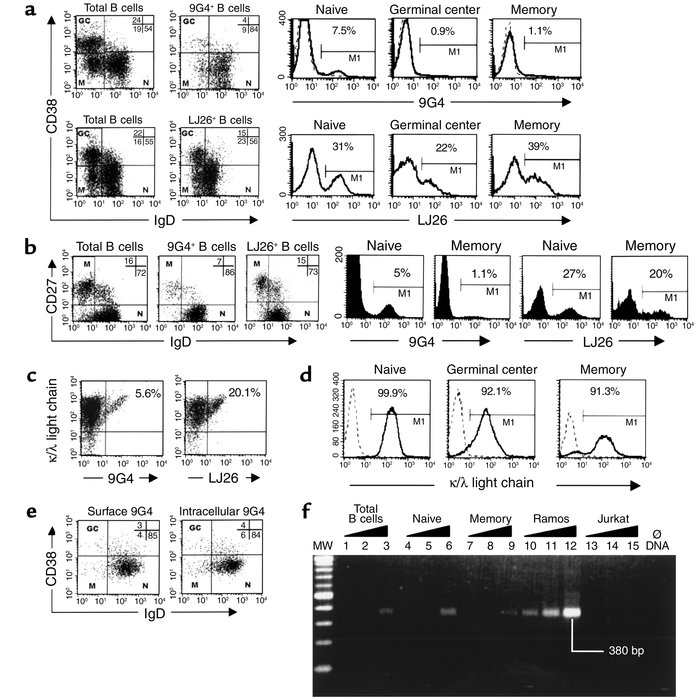 Representation of VH4-34 cells in human B cell subsets. () Distribution of total, VH4-34 (9G4) and VH3 (LJ26) B cells into naive (N), germinal center (GC), and memory (M) subsets in a representative tonsil. Histograms demonstrate the frequency of 9G4 and LJ26 cells in each subset. Bold lines represent VH4-34 and VH3 cells. Isotype antibody controls for 9G4 are shown as superimposed dashed lines. () Similar Vresults were obtained with peripheral blood B cells. () 9G4 and LJ26 cells express similar levels of sIg (determined with anti-κ/λ antibodies). () Analysis of the sIg expression by tonsil B cells. At least 90% of cells in each subset express detectable levels of sIg. () Tonsil B cells were permeabilized and analyzed for either surface or cytoplasmic expression of VH4-34. () PCR analysis of VH4-34 rearrangements. Samples are as follows: MW, 100 bp ladder; Ø DNA, negative control without input DNA; 1–3, total tonsil B cells; 4–6, naive B cells; 7–9, memory B cells; 10–12, VH4-34–expressing Ramos B cell lymphoma; 13–15, Jurkat T cells. The following amounts of DNA template were used: lanes 1, 4, 7, 10, and 13 (33 ng); lanes 2, 5, 8, 11, and 14 (100 ng); lanes 3, 6, 9, 12, and 15 (300 ng). Noticeable amplification of rearranged VH4-34 was detected in memory cells only after 35 PCR cycles with the highest amount of template DNA (300 ng). The amount of product obtained with memory cells was four to ten times lower than that obtained with naive B cells (average of four experiments). Calculations based on equivalent amounts of Ramos cells or Ramos DNA indicate that less than 2% of memory cells express VH4-34.