Ushering in the cardiac role of Ubiquilin1

Ushering in the cardiac role of Ubiquilin1

Protein quality control (PQC) mechanisms are essential for maintaining cardiac function, and alterations in this pathway influence multiple forms of heart disease. Since heart disease is the leading cause of death worldwide, understanding how the delicate balance between protein synthesis and degradation is regulated in the heart demands attention. The study by Hu et al. reveals that the extraproteasomal ubiquitin receptor Ubiquilin1 (Ubqln1) plays an important role in cardiac ubiquitination-proteasome coupling, particularly in response to myocardial ischemia/reperfusion injury, thereby suggesting that this may be a new avenue for therapeutics.

Pathways to transfer ubiquitinated proteins to the proteasome. 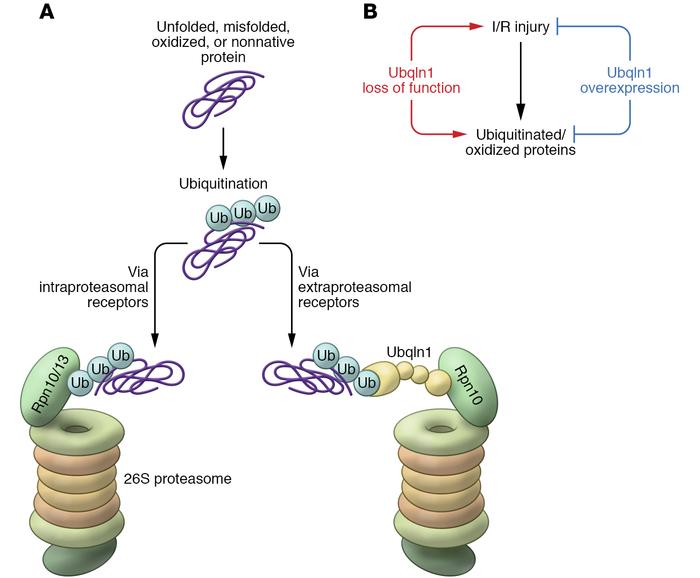 () A ubiquitin tag is added to proteins that need to be degraded, including unfolded, misfolded, nonnative, or oxidized proteins. Two main pathways recruit ubiquitinated proteins to the proteasome: the first relies on intraproteasomal polyubiquitin receptors Rpn10/Rpn13 in the 19S RP, which directly binds polyubiquitin; the second depends upon extraproteasomal ubiquitin receptors, such as Ubqln1 (yellow). Ubqln1 functions as a “shuttle-factor” by binding to ubiquitinated proteins via its UBA domain and subsequently interacts with Rpn10 in the proteasome via its UBL domain. () During I/R injury, unfolded, misfolded, and oxidized proteins are increased, putting greater demand on the UPS. Hu et al. reveal that Ubqln1 expression increases with I/R and that loss of Ubqln1 exacerbates, while ubiquitous overexpression of an Ubqln1 transgene ameliorates, myocardial I/R injury. In cultured cardiomyocytes, Ubqln1 overexpression facilitated proteasome-mediated degradation of oxidized proteins.