Both miRNAs and A-to-I RNA editing, a widespread nucleotide modification mechanism, have recently emerged as key players in cancer pathophysiology. However, the functional impact of RNA editing of miRNAs in cancer remains largely unexplored. Here, we focused on an ADAR2-catalyzed RNA editing site within the miR-379-5p seed region. This site was under-edited in tumors relative to normal tissues, with a high editing level being correlated with better patient survival times across cancer types. We demonstrated that in contrast to wild-type miRNA, edited miR-379-5p inhibited cell proliferation and promoted apoptosis in diverse tumor contexts in vitro, which was due to the ability of edited but not wild-type miR-379-5p to target CD97. Importantly, through nanoliposomal delivery, edited miR-379-5p mimics significantly inhibited tumor growth and extended survival of mice. Our study indicates a role of RNA editing in diversifying miRNA function during cancer progression and highlights the translational potential of edited miRNAs as a new class of cancer therapeutics.

Effects of RNA editing in miR-379-5p on cell proliferation and clone formation. 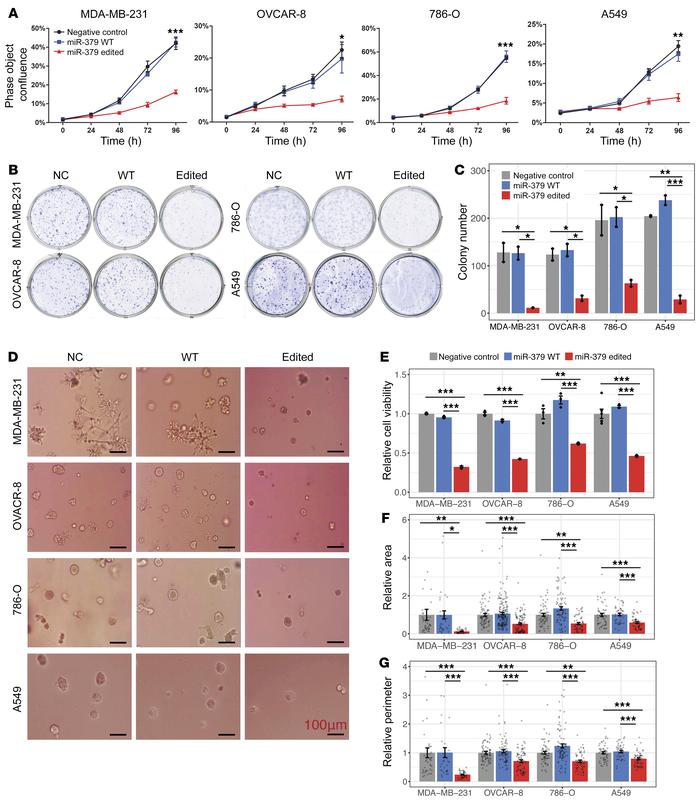