Resident and inflammatory mononuclear phagocytes (MPhs) with functional plasticity in the intestine are critically involved in the pathology of inflammatory bowel diseases (IBDs), the mechanism of which remains incompletely understood. In the present study, we found that increased expression of the E3 ligase F-box and WD repeat domain–containing 7 (FBXW) in the inflamed intestine was significantly correlated with IBD severity in both human diseases and in mouse models. Myeloid Fbxw7 deficiency protected mice from colitis induced by dextran sodium sulfate (DSS) or 2,6,4-trinitrobenzene sulfonic acid (TNBS). Fbxw7 deficiency resulted in decreased production of the chemokines CCL2 and CCL7 by colonic CX3CR1hi resident macrophages and reduced the accumulation of CX3CR1int proinﬂammatory MPhs in colitis-affected colon tissue. Mice that received adeno-associated virus–shFbxw7 (AAV-shFbxw7) showed significantly improved survival rates and alleviation of colitis. Mechanism screening demonstrated that FBXW7 suppressed H3K27me3 modification and promoted Ccl2 and Ccl7 expression via degradation of the histone-lysine N-methyltransferase enhancer of zeste homolog 2 (EZH2) in macrophages. Taken together, our results indicate that FBXW7 degrades EZH2 and increases Ccl2 and Ccl7 in CX3CR1hi macrophages, thereby promoting the recruitment of CX3CR1int proinﬂammatory MPhs into local colon tissues with colitis. Targeting FBXW7 might represent a potential therapeutic approach for the treatment of intestinal inflammation. 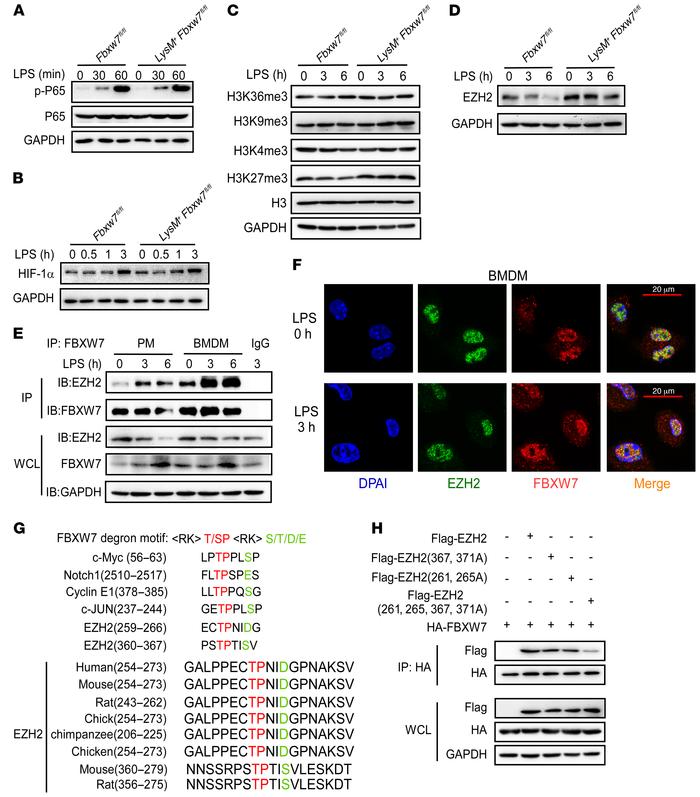 Immunoblot analysis of phosphorylated P65 (p-P65) and total P65 (), HIF-1α (), H3 histone modification (), and histone methyltransferase EZH2 protein levels () in lysates of BMDMs from and mice stimulated with LPS for the indicated durations. () Coimmunoprecipitation (IP) and immunoblot (IB) of BMDMs stimulated with LPS for the indicated durations. () Confocal microscopic imaging of BMDMs that were stimulated with LPS and labeled with Abs against the appropriate protein. () Sequence alignment of EZH2 with FBXW7 degron motif (<RK>S/TP<RK>XS/T/E/D), where X and <RK> are any amino acid, except arginine (R) or lysine (K). () Coimmunoprecipitation and immunoblot analysis of HEK293T cells transfected with HA-FBXW7 along with a vector for Flag-EZH2 (WT), Flag-EZH2 (261 and 265A), Flag-EZH2 (367 and 371A), and Flag-EZH2 (261 and 265, 367, and 371A, 4A). and treated with MG132, followed by immunoprecipitation with anti–HA-M2 beads. All data are representative of at least 3 independent experiments.