The gut microbiota is crucial for our health, and well-balanced interactions between the host’s immune system and the microbiota are essential to prevent chronic intestinal inflammation, as observed in inflammatory bowel diseases (IBD). A variant in protein tyrosine phosphatase non-receptor type 22 (PTPN22) is associated with reduced risk of developing IBD, but promotes the onset of autoimmune disorders. While the role of PTPN22 in modulating molecular pathways involved in IBD pathogenesis is well studied, its impact on shaping the intestinal microbiota has not been addressed in depth. Here, we demonstrate that mice carrying the PTPN22 variant (619W mice) were protected from acute dextran sulfate sodium (DSS) colitis, but suffered from pronounced inflammation upon chronic DSS treatment. The basal microbiota composition was distinct between genotypes, and DSS-induced dysbiosis was milder in 619W mice than in WT littermates. Transfer of microbiota from 619W mice after the first DSS cycle into treatment-naive 619W mice promoted colitis, indicating that changes in microbial composition enhanced chronic colitis in those animals. This indicates that presence of the PTPN22 variant affects intestinal inflammation by modulating the host’s response to the intestinal microbiota.

Transfer of stool after the first DSS cycle recapitulates the phenotype in chronic colitis. 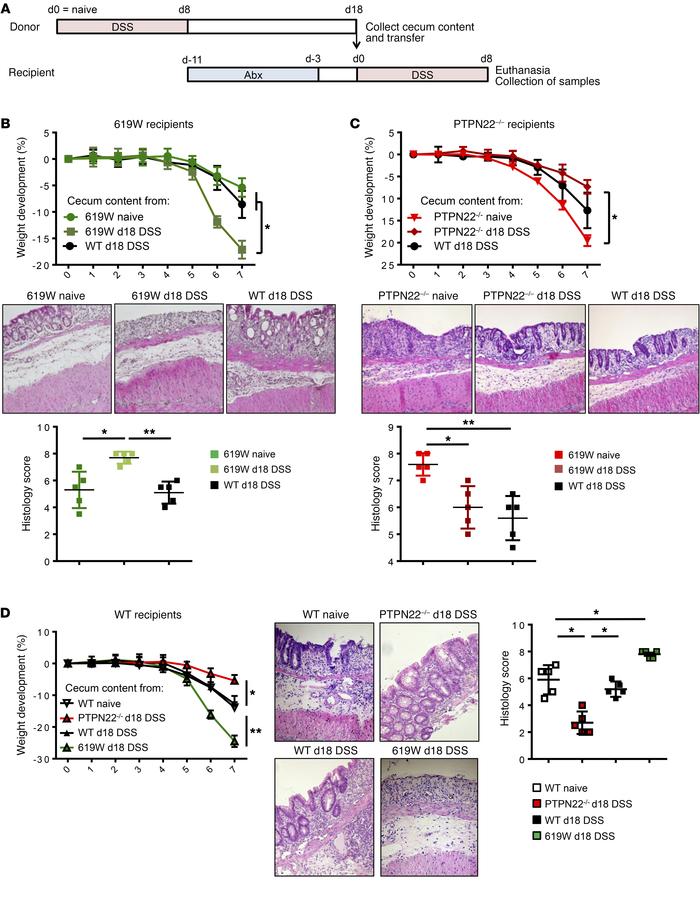