The lipin phosphatidic acid phosphatase (PAP) enzymes are required for triacylglycerol (TAG) synthesis from glycerol 3-phosphate in most mammalian tissues. The 3 lipin proteins (lipin 1, lipin 2, and lipin 3) each have PAP activity, but have distinct tissue distributions, with lipin 1 being the predominant PAP enzyme in many metabolic tissues. One exception is the small intestine, which is unique in expressing exclusively lipin 2 and lipin 3. TAG synthesis in small intestinal enterocytes utilizes 2-monoacylglycerol and does not require the PAP reaction, making the role of lipin proteins in enterocytes unclear. Enterocyte TAGs are stored transiently as cytosolic lipid droplets or incorporated into lipoproteins (chylomicrons) for secretion. We determined that lipin enzymes are critical for chylomicron biogenesis, through regulation of membrane phospholipid composition and association of apolipoprotein B48 with nascent chylomicron particles. Lipin 2/3 deficiency caused phosphatidic acid accumulation and mammalian target of rapamycin complex 1 (mTORC1) activation, which were associated with enhanced protein levels of a key phospholipid biosynthetic enzyme (CTP:phosphocholine cytidylyltransferase α) and altered membrane phospholipid composition. Impaired chylomicron synthesis in lipin 2/3 deficiency could be rescued by normalizing phospholipid synthesis levels. These data implicate lipin 2/3 as a control point for enterocyte phospholipid homeostasis and chylomicron biogenesis.

Lipin PAP activity is required for apoB48 association with lipid for chylomicron assembly. 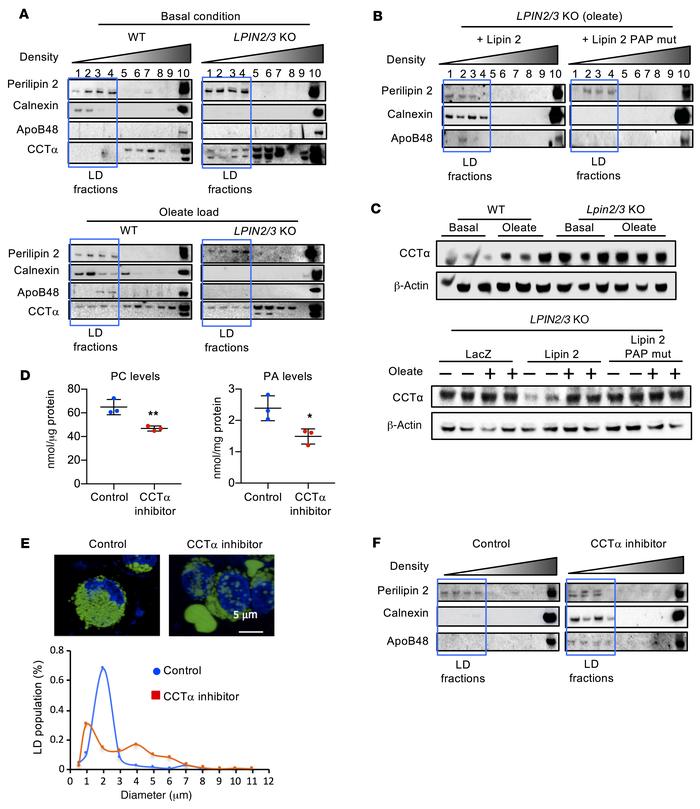 () Analysis of apoB48 association with lipids by density gradient centrifugation followed by immunoblot to detect proteins across fractions. The lipid droplet–containing (LD-containing) fractions (outlined by blue box) were defined by the presence of perilipin 2. In WT cells, lipids were associated with the ER (calnexin), and apoB48 was present in LD fractions after oleate loading. In /3-KO cells, neither apoB48 nor calnexin was present in LD fractions, even after oleate loading. Additionally, CCTα levels were elevated and appeared in the LD fractions even under basal conditions, which was not observed in WT cells. () Lipin PAP activity is required for apoB48 association with lipids in intestinal cells. /3-KO cells were infected with adenovirus expressing WT lipin 2 or PAP-mutant lipin 2. Cells loaded with oleate were assessed for the presence of apoB48 in LD fractions. () Lipin PAP activity modulates CCTα protein levels. Elevated CCTα protein levels in /3-KO cells under basal culture conditions are normalized by introduction of adenoviral vectors for WT, but not PAP-mutant, lipin 2. () CCTα inhibitor reduces PC and PA levels in WT HT-29 cells. Average ± SD, = 3. * < 0.05, ** < 0.01 by test. () Fluorescence image (upper) and size distribution (lower) of LDs in /3-KO HT-29 cells loaded with oleate without or with addition of CCTα inhibitor. ≥ 30. Nuclei are stained with DAPI (blue). () CCTα inhibitor restores calnexin and apoB48 association with lipid-containing fractions from /3-KO cells loaded with oleate. Blots shown throughout this figure are each representative of a single experiment, but the experiments in panels – and are each variations of a similar experiment, such that in composite, the patterns for WT and -KO mice were each replicated in at least 3 independent trials. Blots in , , and were run with the same samples contemporaneously.