Energy stress, such as ischemia, induces mitochondrial damage and death in the heart. Degradation of damaged mitochondria by mitophagy is essential for the maintenance of healthy mitochondria and survival. Here, we show that mitophagy during myocardial ischemia was mediated predominantly through autophagy characterized by Rab9-associated autophagosomes, rather than the well-characterized form of autophagy that is dependent on the autophagy-related 7 (Atg) conjugation system and LC3. This form of mitophagy played an essential role in protecting the heart against ischemia and was mediated by a protein complex consisting of unc-51 like kinase 1 (Ulk1), Rab9, receptor-interacting serine/thronine protein kinase 1 (Rip1), and dynamin-related protein 1 (Drp1). This complex allowed the recruitment of trans-Golgi membranes associated with Rab9 to damaged mitochondria through S179 phosphorylation of Rab9 by Ulk1 and S616 phosphorylation of Drp1 by Rip1. Knockin of Rab9 (S179A) abolished mitophagy and exacerbated the injury in response to myocardial ischemia, without affecting conventional autophagy. Mitophagy mediated through the Ulk1/Rab9/Rip1/Drp1 pathway protected the heart against ischemia by maintaining healthy mitochondria.

The significance of phosphorylation of Rab9 at S179 in CMs in vitro. 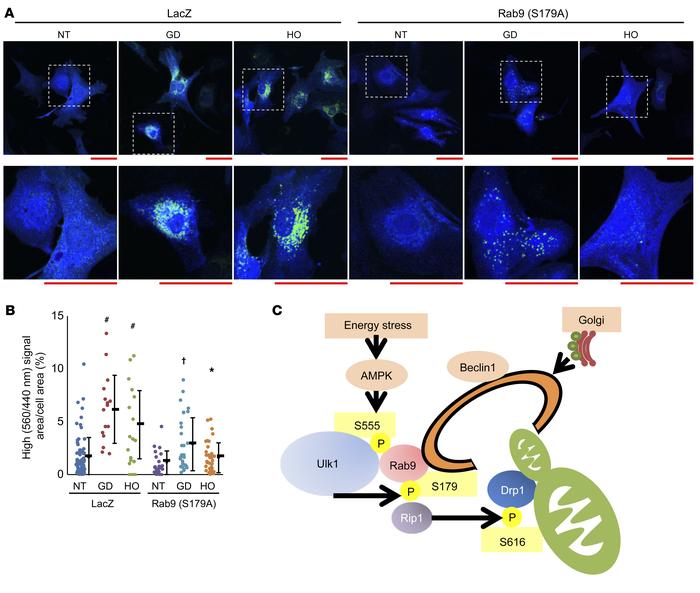 The effect of overexpression of mutant forms of Rab9 upon mitophagy was examined in CMs transduced with Mito-Keima. () Representative images. Scale bars: 50 μm; original magnification, ×2.8 (enlarged insets). () Quantitation of the area of high-ratio dots per total cell area. Number of cells in each group: 79, 16, and 20 (LacZ) and 25, 31, and 35 (Rab9 [S179A]) from 3 independent experiments. Error bars represent the SD. # < 0.01 versus LacZ and no treatment; † < 0.01 versus LacZ and GD; * < 0.01 versus LacZ and hypoxia (Tukey-Kramer’s test). () Proposed model of mitophagy in response to energy stress.