Because metastasis is associated with the majority of cancer-related deaths, its prevention is a clinical aspiration. Prostanoids are a large family of bioactive lipids derived from the activity of cyclooxygenase-1 (COX-1) and COX-2. Aspirin impairs the biosynthesis of all prostanoids through the irreversible inhibition of both COX isoforms. Long-term administration of aspirin leads to reduced distant metastases in murine models and clinical trials, but the COX isoform, downstream prostanoid, and cell compartment responsible for this effect are yet to be determined. Here, we have shown that aspirin dramatically reduced lung metastasis through inhibition of COX-1 while the cancer cells remained intravascular and that inhibition of platelet COX-1 alone was sufficient to impair metastasis. Thromboxane A2 (TXA2) was the prostanoid product of COX-1 responsible for this antimetastatic effect. Inhibition of the COX-1/TXA2 pathway in platelets decreased aggregation of platelets on tumor cells, endothelial activation, tumor cell adhesion to the endothelium, and recruitment of metastasis-promoting monocytes/macrophages, and diminished the formation of a premetastatic niche. Thus, platelet-derived TXA2 orchestrates the generation of a favorable intravascular metastatic niche that promotes tumor cell seeding and identifies COX-1/TXA2 signaling as a target for the prevention of metastasis.

TXA2 analog U46619 abrogates the inhibition of metastasis by aspirin. 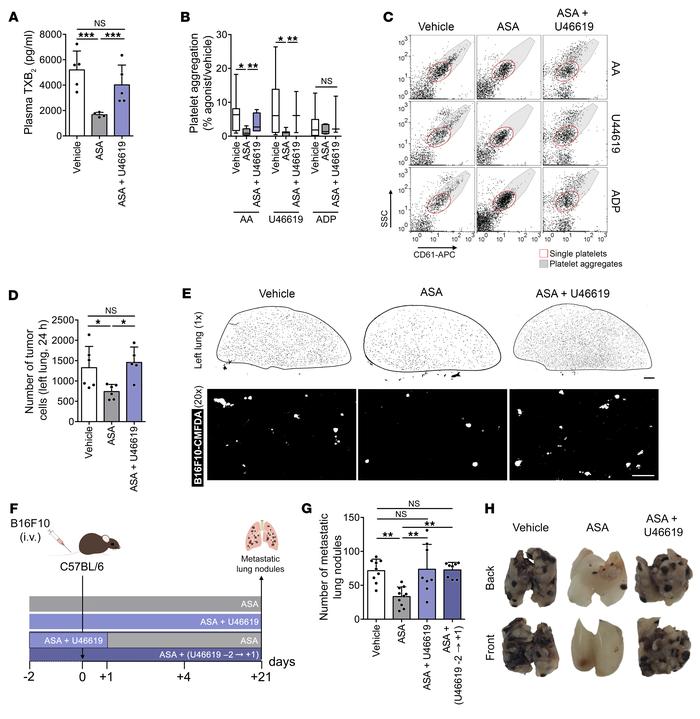