In the era of combined antiretroviral therapy (cART), lung diseases such as chronic bronchitis (CB) and chronic obstructive pulmonary disease (COPD) are common among persons living with HIV (PLWH), particularly smokers. Although smoking is highly prevalent among PLWH, HIV may be an independent risk factor for lung diseases; however, the role of HIV and cigarette smoke (CS) and their potential interaction in the development of chronic lung diseases among PLWH has not been delineated. To investigate this interaction, cynomolgus macaques were exposed to CS and/or simian-adapted human immunodeficiency virus (SHIV) and treated with cART. The development of CB and the lung functions were evaluated following CS±SHIV treatment. The results showed that in the lung, SHIV was a strong independent risk factor for goblet cell metaplasia/hyperplasia and mucus formation, MUC5AC synthesis, loss of tight junction proteins, and increased expression of Th2 cytokines/transcription factors. In addition, SHIV and CS synergistically reduced lung function and increased extrathoracic tracheal ring thickness. Interestingly, SHIV infection generated significant numbers of HIV-gp120+ epithelial cells (HGECs) in small airways and alveoli, and their numbers doubled in CS+SHIV-infected lungs. We conclude that even with cART, SHIV independently induces CB and pro-COPD changes in the lung, and the effects are exacerbated by CS. 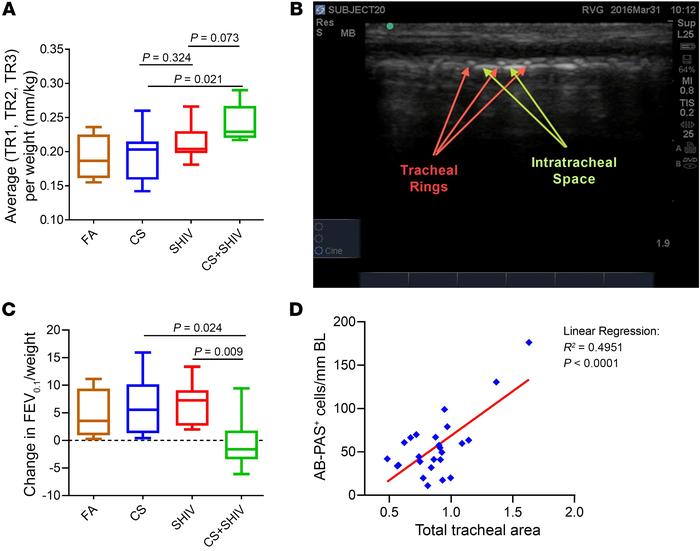