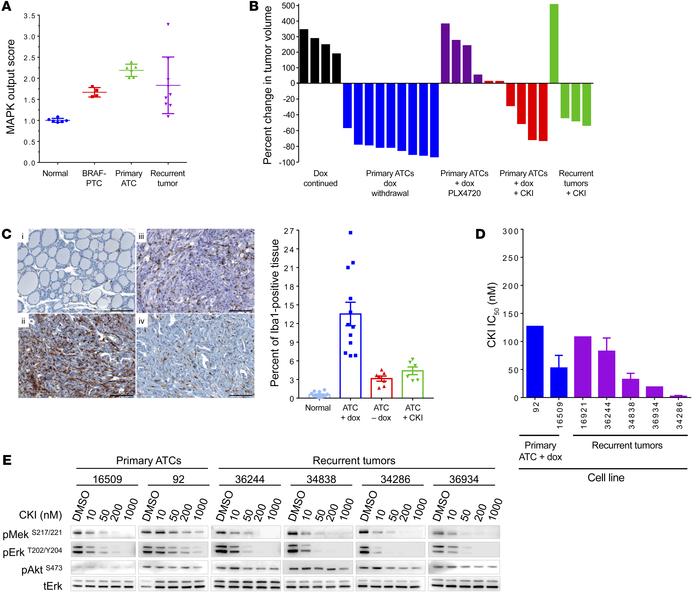 () MAPK output score for normal mouse thyroid, BRAF-PTCs (from TPO-Cre/LSL-BrafV600E mice) (), BRAF/p53 ATCs, and recurrent tumors was calculated from expression array data of flash-frozen tissue from recurrent tumors using MAPK transcriptional targets ( = 4–7) (). () Response of primary or recurrent tumors to dox withdrawal or to treatment with PLX4720 (administered in drug-impregnated chow) or CKI (1.5 mg/kg/d). Tumor volume was measured 11 days after starting the intervention ( = 4–9). () Iba1 IHC (left) in (i) normal thyroid, (ii) untreated primary ATCs, (iii) primary ATCs 11 days after withdrawal of dox, or (iv) starting CKI. Bars (right) represent average percent of tumor positive for Iba1 from at least 6 animals. () IC50 of the MEK inhibitor CKI in cell lines derived from primary or recurrent tumors. Each dose was run in triplicate. Bars represent the IC50 values for cell lines 16509 ( = 4), 36244 ( = 3), and 34286 ( = 2). IC50 for cell lines 92, 16921, and 36934 was calculated from a single experiment. () Dose response of CKI on MEK and ERK phosphorylation in the cell lines listed in . Cells from the primary ATCs were grown on dox, whereas recurrent tumors were off dox. Cells were treated for 1 hour with the indicated doses of CKI, collected, and protein was isolated for Western blotting with antibodies to pERKT202/Y204, tERK, pAKTS473, and pMEKS217/221.