The M2 isoform of pyruvate kinase (PKM2) is highly expressed in most cancer cells, and has been studied extensively as a driver of oncogenic metabolism. In contrast, the role of PKM2 in nontransformed cells is little studied, and nearly nothing is known of its role, if any, in quiescent cells. We show here that endothelial cells express PKM2 almost exclusively over PKM1. In proliferating endothelial cells, PKM2 is required to suppress p53 and maintain cell cycle progression. In sharp contrast, PKM2 has a strikingly different role in quiescent endothelial cells, where inhibition of PKM2 leads to degeneration of tight junctions and barrier function. Mechanistically, PKM2 regulates barrier function independently of its canonical activity as a pyruvate kinase. Instead, PKM2 suppresses NF-kB and its downstream target, the vascular permeability factor angiopoietin 2. As a consequence, loss of endothelial cell PKM2 in vivo predisposes mice to VEGF-induced vascular leak, and to severe bacteremia and death in response to sepsis. Together, these data demonstrate new roles of PKM2 in quiescent cells, and highlight the need for caution in developing cancer therapies that target PKM2.

PKM2 is crucial for angiogenesis in vivo. 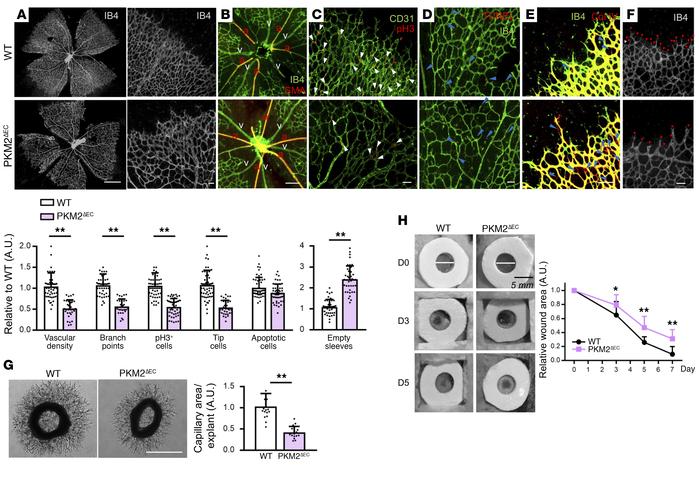 (–) Staining of WT versus PKM2ΔEC mouse retina at P7. () The entire retinal vasculature is visualized by IB4 staining. Scale bar, 1 mm. () Arterio-venous patterning is analyzed by IB4 and SMA staining. a, artery; v, vein. () The number of pH3+ ECs (white arrows) is analyzed by costaining of pH3 and CD31. () Apoptosis was analyzed by TUNEL staining. () Vascular regression is assessed by empty sleeves (blue arrows) with IB4-negative and collagen IV–positive staining. () Number of tip cells (red arrows) is visualized via IB4 staining. Quantifications are at bottom of figure. Scale bars, 50 μm (–). Data are mean ± SD of 4–8 different images per mouse ( = 8). ** < 0.01, by 2-tailed Student’s test. () Capillary sprouting of aortic explants from WT versus PKM2ΔEC mouse. At day 3 of aortic ring explant incubation, each explant was photographed and the area of capillary outgrowth was quantified using Image J. Scale bar, 1 mm. Data are mean ± SD; = 6 segments per aorta from 3 mice each group. ** < 0.01, by 2-tailed Student’s test. () Wound healing assay in WT versus PKM2ΔEC mouse. Two wounds (5 mm) were made on the back of each mouse by using biopsy punch and wound size was monitored every 2–3 days for a week. Data are mean ± SD ( = 5). * < 0.05, ** < 0.01, by 2-tailed Student’s test.