Mitochondrial dysfunction has been implicated in the development of heart failure. Oxidative metabolism in mitochondria is the main energy source of the heart, and the inability to generate and transfer energy has long been considered the primary mechanism linking mitochondrial dysfunction and contractile failure. However, the role of mitochondria in heart failure is now increasingly recognized to be beyond that of a failed power plant. In this Review, we summarize recent evidence demonstrating vicious cycles of pathophysiological mechanisms during the pathological remodeling of the heart that drive mitochondrial contributions from being compensatory to being a suicide mission. These mechanisms include bottlenecks of metabolic flux, redox imbalance, protein modification, ROS-induced ROS generation, impaired mitochondrial Ca2+ homeostasis, and inflammation. The interpretation of these findings will lead us to novel avenues for disease mechanisms and therapy. 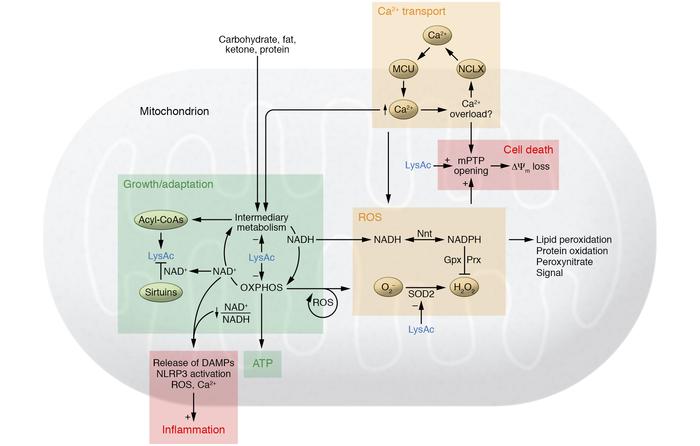 Inadequate stimulation of mitochondrial metabolism increases ATP generation at the expense of triggering maladaptive responses such as imbalance among substrate supply, catabolism, and oxidative phosphorylation (OXPHOS), as well as increased protein modifications by acylation such as acetylation (LysAc). Increased availability of acyl-CoA is a driver for protein modification, while the mismatch between NADH production and oxidation decreases the NAD+/NADH ratio, compromising the sirtuin deacetylase function. These effects collectively increase protein acetylation in the failing heart. Increased protein acylation, especially acetylation, impairs energy metabolism through negative feedback to substrate metabolism and OXPHOS. Further stimulation of mitochondrial metabolism under these conditions increases the risk of calcium overload, leads to greater ROS generation, and induces mPTP opening. Increased protein acetylation also weakens antioxidant defense and sensitizes the mPTP to calcium or ROS. In the face of increased oxidative stress, effort to maintain the mitochondrial antioxidant system (e.g., the Gpx or Prx pathway) may divert energy metabolism away from ATP generation through nicotinamide nucleotide transhydrogenase (Nnt). Oxidative damage causes ROS-induced ROS release, leading to further injury of mitochondria. Failure to remove the damaged mitochondria results in the leak of DAMPs, such as mitochondrial DNA or peptides, that trigger an inflammatory response. NAD+/NADH redox imbalance also promotes NLRP3 inflammasome activation. The vicious cycle of these mechanisms ultimately drives mitochondria from being energy-producing to death-initiating organelles.