Mitochondrial dysfunction has been implicated in the development of heart failure. Oxidative metabolism in mitochondria is the main energy source of the heart, and the inability to generate and transfer energy has long been considered the primary mechanism linking mitochondrial dysfunction and contractile failure. However, the role of mitochondria in heart failure is now increasingly recognized to be beyond that of a failed power plant. In this Review, we summarize recent evidence demonstrating vicious cycles of pathophysiological mechanisms during the pathological remodeling of the heart that drive mitochondrial contributions from being compensatory to being a suicide mission. These mechanisms include bottlenecks of metabolic flux, redox imbalance, protein modification, ROS-induced ROS generation, impaired mitochondrial Ca2+ homeostasis, and inflammation. The interpretation of these findings will lead us to novel avenues for disease mechanisms and therapy.

An overview of mitochondrial function in health and disease. 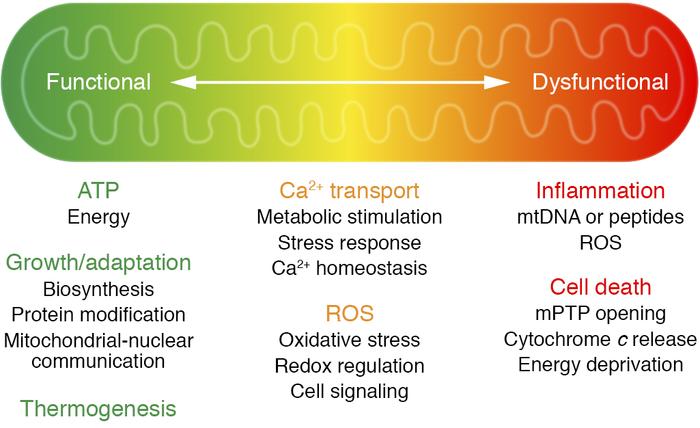 Mitochondria are known as the powerhouse of the cell. Under normal conditions, oxidative metabolism in mitochondria produces ATP; it also produces heat in certain specialized cell types, such as brown adipocytes. In addition to generating ATP, intermediate metabolism in the mitochondria produces metabolites for biosynthesis, protein modification, and signal transduction. Oxidative phosphorylation is coupled with generation of reactive oxygen species (ROS), which can either serve as molecular signals or cause cell damage and cell death. Mitochondrial metabolism is stimulated by calcium, but under pathological conditions, calcium overload can trigger the opening of the mitochondrial permeability transition pore (mPTP). The release of mitochondrial content, such as cytochrome , induces apoptosis, or the loss of membrane potential (a consequence of prolonged mPTP opening) causes ATP deprivation and necrosis. Leak of damage-associated molecular patterns (DAMPs), such as mitochondrial DNA and peptides, or excessive ROS generation also causes inflammation that results in further tissue damage. The transition of mitochondria from a powerhouse to a death engine is key to the pathogenesis of many diseases, including heart failure (also see ).