Find articles by Postlethwaite, A. in: JCI | PubMed | Google Scholar

Interleukin 4 (also known as "B cell stimulatory factor-1"), a cytokine product of T lymphocytes and mast cells, stimulates synthesis of the extracellular matrix proteins, types I and III collagen and fibronectin, by human dermal fibroblasts in vitro. Stimulation of collagen by human recombinant (hr)IL-4 was also demonstrated in several fibroblastic synovial cell lines obtained from patients with rheumatoid arthritis and osteoarthritis. The stimulatory effect of hrIL-4 on fibroblast collagen synthesis was specifically neutralized by rabbit anti-hrIL-4 Ig. IL-4 specifically increased the steady-state levels of types I and III procollagen and fibronectin mRNAs, with no effect on cytoplasmic beta-actin mRNA. Quantitative analysis of the levels of Pro alpha 1(I) collagen transcripts in IL-4-treated fibroblast cultures was also corroborated by antisense RNA-mRNA hybridization and RNAse resistant hybrids which showed that IL-4-treated fibroblasts expressed higher levels of Pro alpha 1(I) collagen transcripts. Nuclear run-off transcription experiments indicated that IL-4 stimulated the rates of mRNA biogenesis. Based on these observations we conclude that IL-4 exerts its effect on collagen and fibronectin synthesis at the pretranslational level, resulting in synthesis of these extracellular matrix proteins. These and other data suggest that IL-4 may be a "fibrogenic cytokine" that could be important in promoting biogenesis of extracellular matrix proteins in normal wound healing and in pathological fibrosis in which mast cells and T lymphocytes play a central role. 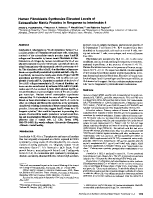 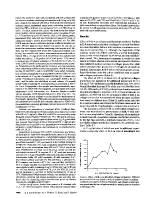 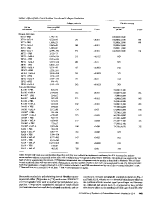 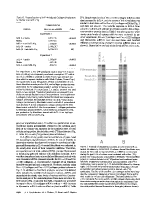 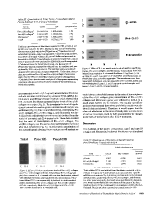 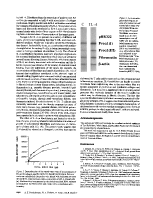 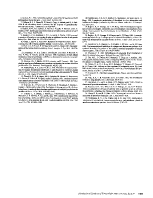