Localization of the cystic fibrosis transmembrane conductance regulator in pancreas.

Cystic fibrosis (CF) is characterized by an abnormality in cAMP-regulated chloride transport that results from a primary defect in the protein product of the CF gene, the CF transmembrane conductance regulator (CFTR). In this report, antibodies against CFTR peptides were used to localize the CFTR protein in human pancreas. An affinity purified antibody (alpha-1468) raised against a synthetic CFTR peptide identified a 155-170-kD protein on immunoblot. Cytochemical studies with alpha-1468 localized CFTR to small branching, tubular structures. The same structures were recognized by two other antibodies raised against different regions of the CFTR molecule. To identify the cells being stained, double-label immunofluorescence studies were performed using alpha-1468 and a monoclonal antibody which stains pancreatic centroacinar and intralobular duct cells. Both antibodies localized to the same population of cells, with alpha-1468 being confined to the apical domain of these cells. No conclusive staining of acinar cells was evident. These findings suggest that proximal duct epithelial cells play a key role in the early events leading to pancreatic insufficiency in CF, and imply that apical chloride transport by these cells is essential for normal pancreatic secretory function. 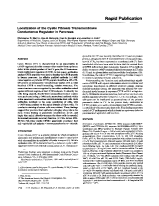 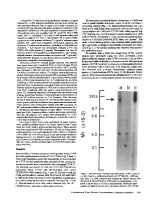 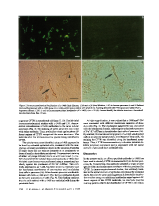 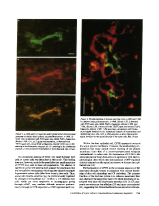 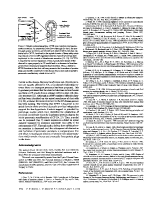