In human and experimental glomerulonephritis, glomerular hypercellularity results both from accumulation of macrophages and proliferation of resident glomerular cells. The recent identification of macrophage-derived factors that stimulate mesangial and epithelial cell proliferation suggests that these factors might contribute to the hypercellularity. To determine the identity of such macrophage-derived growth factors, we studied the effect of leukotrienes (LTs), products that are released from macrophages and leukocytes, on proliferation of human glomerular epithelial cells in culture. Dose-dependent (1-100 nM) stimulation of [3H]thymidine incorporation, an index of cell proliferation, was observed in cells incubated with the sulfidopeptide LTs, LTC4 and LTD4, but not with LTB4. The response was 248 and 172% of control values at 100 nM LTC4 and LTD4, respectively. This effect of LTC4 was abolished by FPL 55712. Subsequent binding studies demonstrated that glomerular epithelial cells possess specific receptors for LTC4. [3H]LTC4 bound rapidly at 8 degrees C to the cells. There was a plateau after 40 min incubation. Maximum specific binding was 70-90% of total binding. Specific binding was totally reversible with addition of an excess of unlabeled LTC4. Analysis of time-course association slopes at two concentrations of [3H]LTC4 and of the competition between a single concentration of [3H]LTC4 and increasing concentrations of unlabelled LTC4 allowed calculation of dissociation constants (Kd) of 220 and 217 nM, respectively. Both LTD4 and LTE4 exhibited ED50 values that were at least one order of magnitude higher than for LTC4. Thus, our findings suggest that LTC4 binds to specific receptors of glomerular epithelial cells, promotes proliferation of these cells, and could contribute to epithelial hypercellularity found in glomerulonephritis. 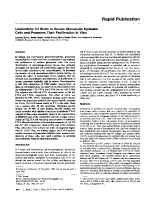 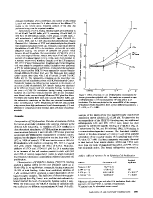 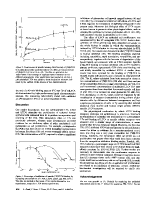 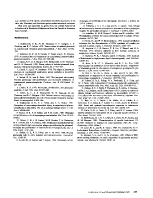