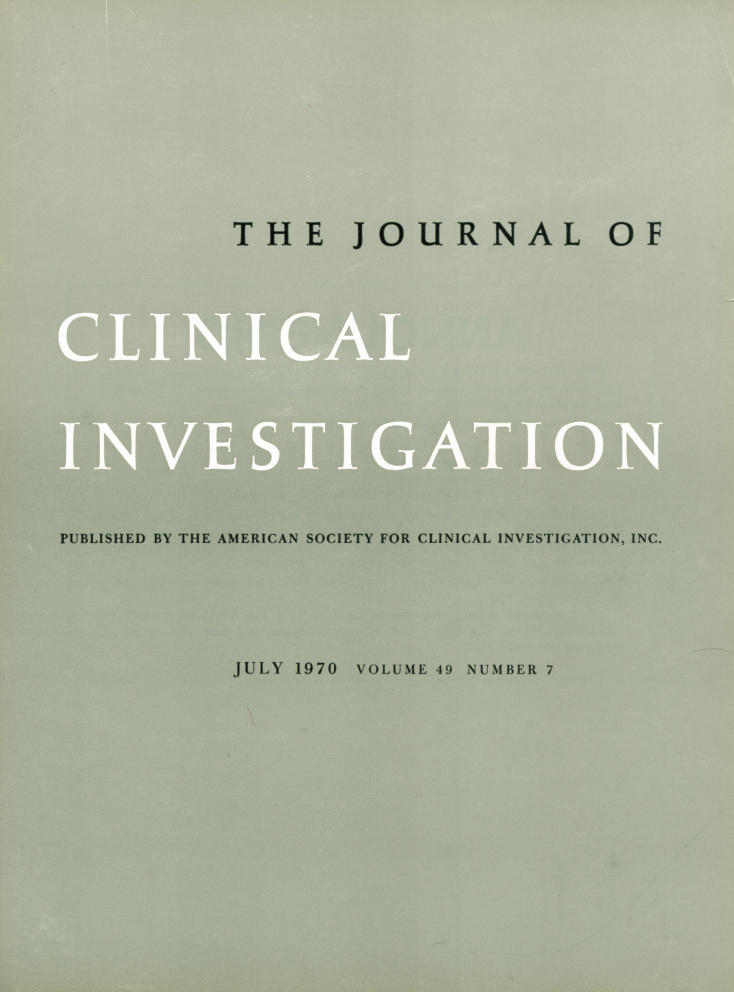 Observations on a model of proliferative lung disease: I. Transpulmonary arteriovenous differences of lactate, pyruvate, and glucose

Observations on a model of proliferative lung disease: I. Transpulmonary arteriovenous differences of lactate, pyruvate, and glucose

Intravenous injections of complete Freund's adjuvant, used by others to stimulate the reticuloendothelial system of small laboratory animals, produced granulomas resembling sarcoid in the lung of the dog. At the height of the disease, when granulomas occupied more than half of the alveolar tissues, transpulmonary arteriovenous (A-[unk]V) differences of lactate, pyruvate, and glucose were measured. When the diseased dogs breathed room air, the A-[unk]V differences of lactate and pyruvate were greater than normal; and when the dogs breathed an hypoxic mixture, the differences increased further. Hence the model affords the opportunity for studying the in vivo metabolism of diseased lungs. It may also prove useful for studying other aspects of granulomatous disease which cannot be easily approached in man.

Observations on a model of proliferative lung disease: II. Description of pulmonary gas exchange and comparison of Fick and dye cardiac outputs

Observations on a model of proliferative lung disease: II. Description of pulmonary gas exchange and comparison of Fick and dye cardiac outputs

Measurements of gas exchange in dogs with granulomatous lung disease resembled those which have been made in similar disorders of man. The minute volume of ventilation was large, the oxygen extracted from each liter of ventilation was low, and the arterial blood oxygen saturation tended to be subnormal despite hyperventilation. When the diseased dogs breathed 21% oxygen and had alveolar oxygen tensions above 100 mm Hg, the pulmonary blood flows calculated from the Fick principle were significantly higher than those estimated by the dye-dilution method. By way of contrast, the two values agreed when the alveolar tensions were lowered. Whether the agreement of the flows is causally related to the alveolar tension remains an open question. A possible explanation may lie in the effect of alveolar tension on the oxygen consumed by the diseased lung.

Compliance of the infarcted left ventricle was studied in dogs 3-5 days after occlusion of the left anterior descending coronary artery. Compliance was assessed from postmortem pressure-volume curves and from pressure-length measurements (mercury-in-silastic segment length gauges) made both in vivo and postmortem. Postmortem pressure-volume curves showed reduced compliance compared to sham-operated animals. Postmortem pressure-length curves of infarcted and adjacent normal myocardium indicated that the diminished total compliance could be attributed to an increase in stiffness of the infarcted area. This was confirmed by in vivo end-diastolic pressure-length changes produced by transient aortic occlusion. The infarcted area was akinetic, showing neither contraction nor aneurysmal bulging. In addition, anesthetized dogs with infarcts, when compared with sham-operated animals, had similar left ventricular end-diastolic volumes (indicator dilution method), but higher left ventricular end-diastolic pressures. Taken with previous observations, which show that systolic aneurysmal bulging is uniformly present at the onset of ischemia, these results indicate that stiffening of the ischemic myocardium occurs during the first 5 days after infarction, and show that elevation of left ventricular filling pressure does not necessarily signify ventricular dilatation. The results also suggest a mechanism whereby ventricular performance may improve during recovery from acute myocardial infarction.

The cardiovascular effects of elevated cerebrospinal fluid (CSF) pressure were studied in 18 dogs, 6 in a control group, 6 after alpha adrenergic blockade, and 6 after beta adrenergic blockade. Vascular pressures did not change until CSF pressure was increased from 100 mm Hg to 200 mm Hg.

Acetylsalicylic acid-induced hemolysis and its mechanism

Acetylsalicylic acid-induced hemolysis and its mechanism

Acetylsalicylic acid (ASA) is known to cause severe hemolytic anemia in some glucose-6-phosphate-dehydrogenase-deficient (G-6-PD-deficient) individuals. To study its mechanism, erythrocytes from an ASA-sensitive patient were transfused into a normal compatible recipient. The administration of 2,5-dihydroxybenzoic (gentisic) acid, a known ASA metabolite with redox properties, to the recipient resulted in a marked decrease in the survival of the patient's erythrocytes. Similar studies with red cells from individuals with A- and Mediterranean variants of G-6-PD revealed no alteration in the erythrocytes' survival. Further studies disclosed that both salicylate and gentisate competitively inhibited the G-6-PD from the ASA-sensitive patient resulting in a marked change in the Km for NADP. These drugs also inhibited the A- and Mediterranean variants of G-6-PD. The magnitude of inhibition, however, was comparatively small and not different from that observed with a normal enzyme.

Idiopathic postural hypotension: physiologic observations and report of a new mode of therapy

Idiopathic postural hypotension: physiologic observations and report of a new mode of therapy

Two patients with severe postural hypotension associated with upper motor neuron and cerebellar impairment (Shy-Drager syndrome) have been studied. Head-up tilt and lower body negative pressure application caused marked falls in arterial pressure; in one patient, paradoxical vasodilatation was observed. Ice application did not increase arterial pressure or calculated forearm vascular resistance. Intravenous atropine in one patient increased heart rate by 18 beats per min, a cardioacceleratory response similar to exhausting recumbent exercise in that patient. 24 hr urinary catecholamine excretion was low, but aldosterone secretory rate was normal in the more severely afflicted patient. A prolonged elevation of plasma renin activity was noted when post-tilt hypertension occurred. When head-up tilt was not followed by this hypertensive period, plasma renin activity response to tilting was normal. Intra-arterial norepinephrine and tyramine both elicited a vasoconstrictor response. Intra-arterial infusions of norepinephrine and tyramine were repeated after administration of the monoamine oxidase inhibitor tranylcypromine. Norepinephrine was potentiated 4.1- and 0.5-fold in the two patients; tyramine was potentiated 3.7-and 1.1-fold in the two patients, respectively. A therapeutic program of tranylcypromine and tyramine (in the form of cheddar cheese) resulted in substantial clinical improvement. It is concluded that in at least some patients with idiopathic postural hypotension, norepinephrine is present in postganglionic sympathetic fibers. A therapeutic program of tyramine and a monoamine oxidase inhibitor may be of value when more conventional modes of therapy fail.

The effect of cardiac disease on hemoglobin-oxygen binding

The effect of cardiac disease on hemoglobin-oxygen binding

Lithium has been reported to be goitrogenic when used for the treatment of manic-depressive psychosis. To investigate the effects of lithium on iodine metabolism, male Sprague-Dawley rats were placed on a low iodine (LID) or normal iodine diet (NID) containing enough Li2CO3 to give serum lithium levels of 0.23-0.86 mEq/liter (human therapeutic range is 0.6-1.6 mEq/liter). The following effects were noted with lithium treatment: (a) thyroid weight increased concomitant with a slowing of thyroidal iodine release; (b) the ability to concentrate iodide was increased only after goiters were established; (c) on the LID, 131I uptake was elevated throughout all phases of treatment, even when the release rate was normal; (d) iodine organification was unaffected but the proportion of 131I present as iodothyronines was decreased; (e) the thyroidal 127I content was increased; (f) despite these changes, the serum PBI remained normal as did the thyroxine turnover rate; and (g) thyrotropin (TSH) levels in serum were the same as controls except for a slight elevation early in the course of treatment; TSH levels did not correlate with goitrogenesis.

The susceptibility of exocrine and serum immunoglobulins and antibodies to proteolytic degradation was assessed. Colostral and duodenal fluid exocrine 11S IgA, monomeric serum IgA, and IgG were digested with trypsin, chymotrypsin, or duodenal fluid. Exocrine IgA was more resistant to digestion than were the serum immunoglobulins. Under conditions of the experiments, most of colostral IgA retained its 11S quaternary structure, including the secretory piece; the portion degraded was reduced almost entirely to peptides.

Polymorphonuclear neutrophils (PMN) from patients with chronic granulomatous disease of childhood have impaired bactericidal activity and are deficient in diphosphopyridine nucleotide, reduced form of, (NADH) oxidase. Since hydrocortisone had been shown to inhibit NADH oxidation, experiments were undertaken to determine the effect of hydrocortisone on several parameters of human PMN function.

The transplacental passage and the production of aldosterone were studied in late pregnancy during a constant infusion of 1,2-aldosterone-3H to mothers at the time of elective cesarean section.

Isolated rat islets of Langerhans were incubated for 60, 120, and 180 min and the incorporation of leucine-3H into proinsulin and insulin moieties was followed. Synthesis and release of these hormones could be followed by separate extractions of islets and incubation media.

The immune response after streptococcal infection of the skin and of the upper respiratory tract (URT) was studied prospectively in a group of normal children, ages 3-6 yr. The children were examined and cultures for group A streptococci were obtained weekly from the throat, nose, and skin lesions (when present). Paired sera were collected at the beginning and end of the study, and the changes in antibody titers were measured for three different streptococcal antigens: streptolysin O, deoxyribonuclease B (DNAse B), and nicotinamide adenine dinucleotidase (NADase).

Among 25 patients with benign, essential hypertension, and an equal number with other benign forms of hypertension, without serious cardiac, renal, or cerebrovascular impairment, 41 cases failed to reduce aldosterone excretion rates into the normal range (less than 5 μg/day) on a daily intake of 300 mEq of sodium. The hypertensive patients excreted slightly less than the normal fraction of labeled aldosterone as acid-hydrolyzable conjugate. Secretion rates were significantly higher in the hypertensive patients than in normotensive controls taking the high-sodium intake.

The effect of early bilateral pyelonephritis on urinary concentrating ability was studied in rats injected intravenously with enterococci or Staphylococcus aureus and in rats inoculated with Escherichia coli into the medullae of both kidneys. The mean maximum urinary osmolality of normal rats was 2352 mOsm/kg of water. Inoculation of E. coli caused reversible pyelonephritis with sterilization of the kidneys within 12 wk. By 1 day after injection the mean maximum urinary osmolality had decreased to about 1100 mOsm. remained at this level for 3 wk, and then rose to normal by 12 wk. After injection of enterococci and staphylococci, the mean maximum urine osmolality decreased over 3-4 days to about 1000 and 800 mOsm respectively. In the enterococcal infection (which is chronic) the maximum urine osmolality remained about 1200 mOsm for at least 12 wk whereas in the staphylococcal infection (which is reversible) the osmolality gradually rose.

The effects of late pregnancy on adipose tissue metabolism have been examined in fed and fasted rats. Lumbar fat was excised from 19-day pregnant and age-matched virgin rats which had been given unrestricted access to food (“fed”) or fasted for 48 hr before sacrifice.

Urine concentration and dilution in hypokalemic and hypercalcemic dogs

Urine concentration and dilution in hypokalemic and hypercalcemic dogs