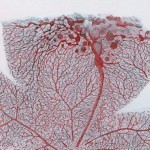 [/caption] A retinal prep stained with Lectin and studied by confocal. The deep and superficial layers were separated into separate Z stacks and colored differently (one red, one blue). Chan et al. investigate the multiple genetic pathways that lead to cerebral cavernous malformation, a vascular defect that can lead to stroke.

Cerebral cavernous malformations (CCMs) are a common type of vascular malformation in the brain that are a major cause of hemorrhagic stroke. This condition has been independently linked to 3 separate genes: Krev1 interaction trapped (KRIT1), Cerebral cavernous malformation 2 (CCM2), and Programmed cell death 10 (PDCD10). Despite the commonality in disease pathology caused by mutations in these 3 genes, we found that the loss of Pdcd10 results in significantly different developmental, cell biological, and signaling phenotypes from those seen in the absence of Ccm2 and Krit1. PDCD10 bound to germinal center kinase III (GCKIII) family members, a subset of serine-threonine kinases, and facilitated lumen formation by endothelial cells both in vivo and in vitro. These findings suggest that CCM may be a common tissue manifestation of distinct mechanistic pathways. Nevertheless, loss of heterozygosity (LOH) for either Pdcd10 or Ccm2 resulted in CCMs in mice. The murine phenotype induced by loss of either protein reproduced all of the key clinical features observed in human patients with CCM, as determined by direct comparison with genotype-specific human surgical specimens. These results suggest that CCM may be more effectively treated by directing therapies based on the underlying genetic mutation rather than treating the condition as a single clinical entity.