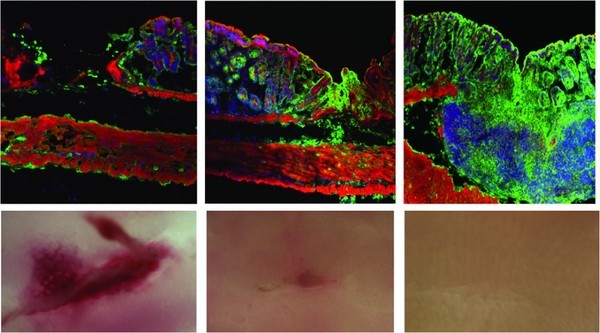 The cells that line the intestine, known as the intestinal mucosa, can become injured in disease states such as ulcerative colitis. To repair the injury, epithelial cells must migrate to the wound; however, the signals that drive this migration are unknown. Leoni et al. identified signaling pathways that mediate repair of the intestinal mucosa. The panels above show the colonic mucosa at 0, 1, and 6 days after biopsy-induced injury. In the upper row, the colonic mucosa was stained with antibodies against ANXA1 (green), F-actin (red), and nuclei (blue). Leoni and colleagues found that the protein AnxA1 promoted wound healing of the intestinal mucosa by driving epithelial cell migration.

-formyl peptide receptors (FPRs) are critical regulators of host defense in phagocytes and are also expressed in epithelia. FPR signaling and function have been extensively studied in phagocytes, yet their functional biology in epithelia is poorly understood. We describe a novel intestinal epithelial FPR signaling pathway that is activated by an endogenous FPR ligand, annexin A1 (ANXA1), and its cleavage product Ac2-26, which mediate activation of ROS by an epithelial NADPH oxidase, NOX1. We show that epithelial cell migration was regulated by this signaling cascade through oxidative inactivation of the regulatory phosphatases PTEN and PTP-PEST, with consequent activation of focal adhesion kinase (FAK) and paxillin. In vivo studies using intestinal epithelial specific and mice demonstrated defects in intestinal mucosal wound repair, while systemic administration of ANXA1 promoted wound recovery in a NOX1-dependent fashion. Additionally, increased ANXA1 expression was observed in the intestinal epithelium and infiltrating leukocytes in the mucosa of ulcerative colitis patients compared with normal intestinal mucosa. Our findings delineate a novel epithelial FPR1/NOX1-dependent redox signaling pathway that promotes mucosal wound repair.