Several lines of evidence suggest that male embryos may have greater vulnerability than female embryos to disordered inflammation; therefore, antiinflammatory drugs, such as low-dose aspirin (LDA), may alter the sex ratio. Here, we assessed the effect of LDA on male live birth and male offspring, incorporating pregnancy losses ( = 56) via genetic assessment, as part of a parallel-design, block-randomized, placebo-controlled trial of preconception LDA.

Participants (615 treated with LDA, 613 treated with placebo) ranged in age from 18 to 40 years of age, with 1 to 2 prior pregnancy losses. We estimated the intention-to-treat (ITT) risk ratio (RR) and 95% CI and assessed interaction with baseline high-sensitivity C-reactive protein (hsCRP) serum concentration — a marker of systemic inflammation.

Initiation of LDA prior to conception restored numbers of male live births and pregnancy with male offspring among women with 1 to 2 prior pregnancy losses. Moreover, our data suggest that LDA modulates inflammation that would otherwise reduce the conception or survival of male embryos.

The Hospital for Sick Children, Toronto, ON

The recent report (Radin 20151) on role of low dose aspirin on sex ratios at birth is very interesting. While EAGeR trial data2 and following analysis are compelling, we had concern regarding the position endowed to inflammation in authors’ unifying hypothesis. hsCRP plays a pivotal role in establishment of inflammatory status which determines effect of low dose aspirin on gender ratio. Yet, two doubts regarding its ability to support such reaching conclusions are worthy of discussion:

1. What exactly does this marker inform on reproductive tract associated systemic inflammation? As previously published, hsCRP could become elevated in various conditions and associations. Human studies have identified obesity3 and hypertension4, for example, as possible confounders.

2. What is the relation between the concentrations of hsCRP and the level of inflammation in this context? Clinical usage of this marker warrants great caution as it may be perceived as a continuous variable, when in fact it does not provide more data than does a dichotomous variable. Risk stratification using hsCRP is feasible5; however, assignment of hsCRP concentrations to corresponding categories of inflammation severity and further to risk categories of interest should be optimally derived from a model describing the relationship among these parameters as shown for other conditions5.

Our opinion is that inflammation could indeed be a factor accounting for the reported significant change in sex ratios at birth, but as published, we find the indirect laboratory support for this notion potentially misleading. Future studies on this important topic are encouraged to actively seek and control for potential confounders, and categorize serum hsCRP levels with utmost care.

We appreciate the comments by Leibson et al. on our recent study of sex ratio following preconception low-dose aspirin (LDA) in the EAGeR Trial (1). This response addresses their specific questions on bias from confounding and the choice of tertiles to analyze high-sensitivity C-reactive protein (hsCRP) hsCRP.

As in any large randomized trial, the balance of confounders with respect to LDA is ensured by randomization, as was demonstrated by the balance of baseline characteristics by treatment assignment (2). Furthermore, baseline characteristics including BMI and blood pressure were balanced by treatment assignment even after stratifying by lower, middle, and higher hsCRP. We agree there are many predictors of hsCRP, and we expect all of them to be balanced across treatment groups by randomizations. Therefore, it should mitigate concerns about confounding. 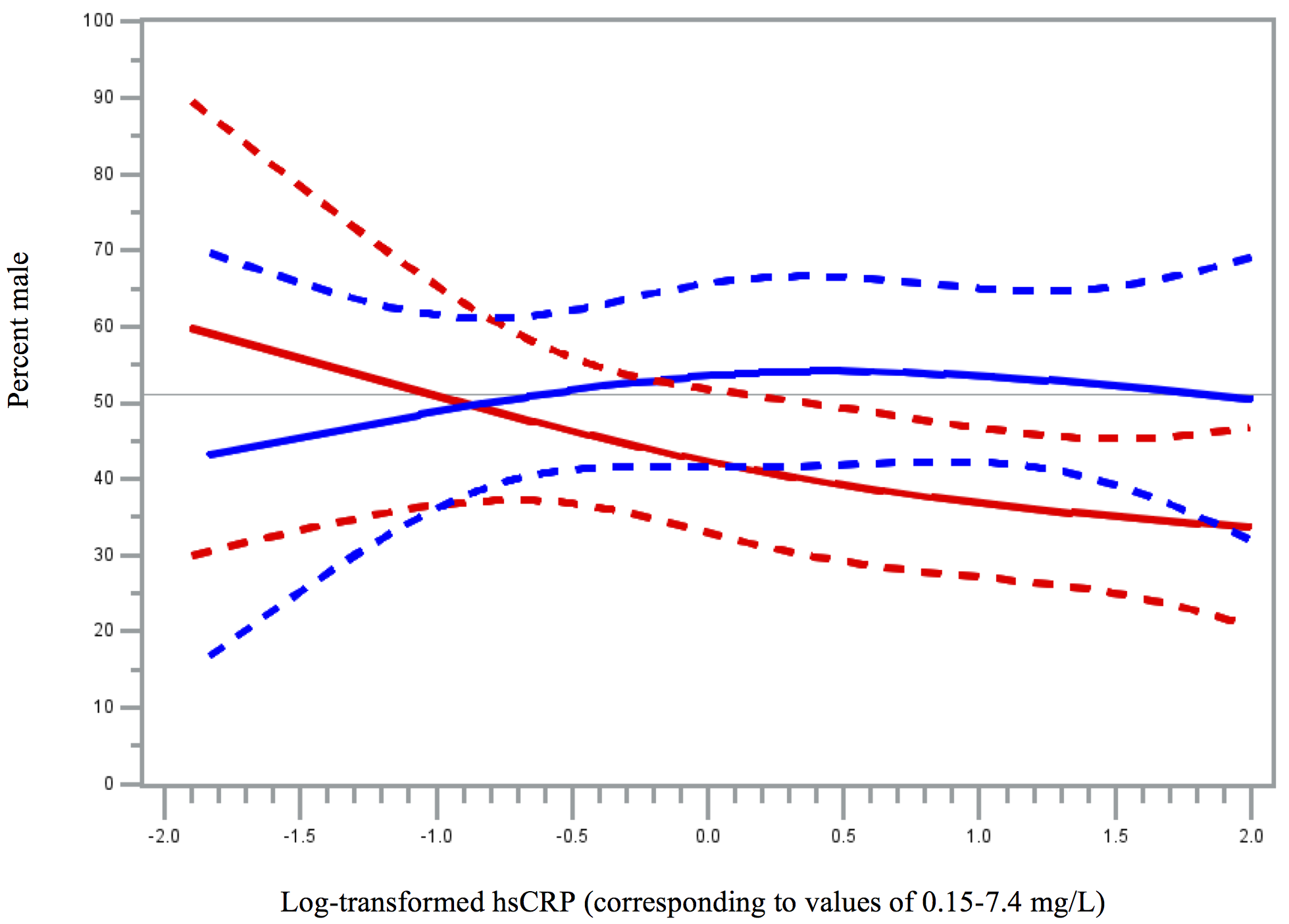 Figure 1. Restricted Cubic Spline Regression of log-transformed preconception hsCRP and probability of a male among live births, stratified by treatment group. The estimated percent male in the LDA group is shown by the solid blue line with dashed blue lines for the 95% confidence interval. The estimated percent male in the placebo group is shown by the solid red line with dashed red lines for the 95% confidence interval. Log-binomial regression curve was fit by using the SAS macro program GLMCURV9 (E. Hertzmark, R. Li, B. Hong, D. Spiegelman. Channing Laboratory, Boston, MA). The model was adjusted for selection of live births using longitudinal inverse-probability weighting. The maximum of the range shown, hsCRP=7.4 mg/L, was the 92nd percentile of hsCRP.  For comparison, a horizontal line is placed at 51% male.

We agree with Leibson et al. that there is a need for further evaluation of the role of systemic inflammation and LDA on reproductive outcomes and encourage our scientific colleagues to conduct additional investigations to inform the prevention of pregnancy loss and complications.