While greater than 80% of angiotensin II (Ang II) formation in the human heart and greater than 60% in arteries appears to result from chymase activity, no cardiovascular cell–expressed chymase has been previously reported. We now describe the cloning of a full-length cDNA encoding a novel chymase from rat vascular smooth muscle cells. The cDNA encompasses 953 nucleotides, encodes 247 amino acids, and exhibits 74% and 80% homology in amino acid sequence to rat mast cell chymase I and II, respectively. Southern blot analysis indicates that the rat vascular chymase is encoded by a separate gene. This chymase was induced in hypertrophied rat pulmonary arteries, with 11-fold and 8-fold higher chymase mRNA levels in aortic and pulmonary artery smooth muscle cells from spontaneously hypertensive than in corresponding tissues from normotensive rats. We assayed the activity of the endogenous enzyme and of a recombinant, epitope-tagged chymase in transfected smooth muscle cells and showed that Ang II production from Ang I can be inhibited with chymostatin, but not EDTA or captopril. Spontaneously hypertensive rats show elevated chymase expression and increased chymostatin-inhibitable angiotensin-converting activity, suggesting a possible role for this novel enzyme in the pathophysiology of hypertension. 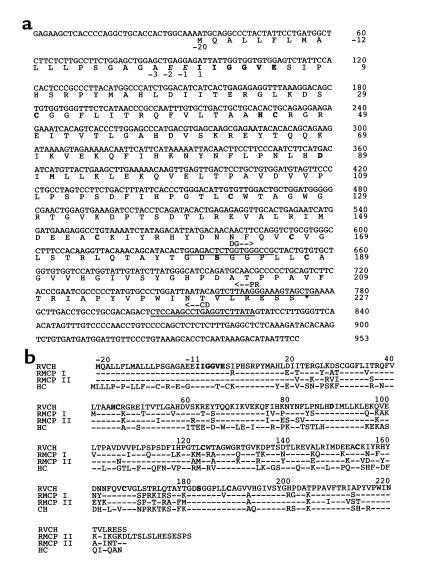 Nucleotide sequence and deduced amino acid sequence of RVCH. () The nucleotide sequences annealing to the degenerate primer (DG), the primer used for 5′-RACE cDNA synthesis (CD), and the PCR primer (PR) are underlined as described in Methods. The deduced amino acid (aa) sequence contains an 18-aa signal peptide (–20 to –3), a 2-aa proenzyme (–2 to –1), and the mature enzyme (aa 1 to 227). The catalytic triad of amino acid (His45, Asp89, and Ser182), conserved Cys (C) residues, and a conserved sequence for serine proteases at the NH2-terminal (IIGGVE) are in boldface. The sequence is available under GenBank accession number AF063851. () Comparison of amino acid sequence of RVCH with other chymases. The deduced amino acid sequence of RVCH is aligned with those of RMCP I, RMCP II, and human chymase (HC). The residues identical to those of RVCH are indicated with hyphens. The conserved catalytic triad, Cys residues, and the conserved sequence for serine proteases (IIGGVE) are in boldface.