The paracaspase MALT1 plays an essential role in activated B cell–like diffuse large B cell lymphoma (ABC DLBCL) downstream of B cell and TLR pathway genes mutated in these tumors. Although MALT1 is considered a compelling therapeutic target, the development of tractable and specific MALT1 protease inhibitors has thus far been elusive. Here, we developed a target engagement assay that provides a quantitative readout for specific MALT1-inhibitory effects in living cells. This enabled a structure-guided medicinal chemistry effort culminating in the discovery of pharmacologically tractable, irreversible substrate-mimetic compounds that bind the MALT1 active site. We confirmed that MALT1 targeting with compound 3 is effective at suppressing ABC DLBCL cells in vitro and in vivo. We show that a reduction in serum IL-10 levels exquisitely correlates with the drug pharmacokinetics and degree of MALT1 inhibition in vitro and in vivo and could constitute a useful pharmacodynamic biomarker to evaluate these compounds in clinical trials. Compound 3 revealed insights into the biology of MALT1 in ABC DLBCL, such as the role of MALT1 in driving JAK/STAT signaling and suppressing the type I IFN response and MHC class II expression, suggesting that MALT1 inhibition could prime lymphomas for immune recognition by cytotoxic immune cells.

Compound 3 suppresses the growth of ABC DLBCL tumors in vivo. 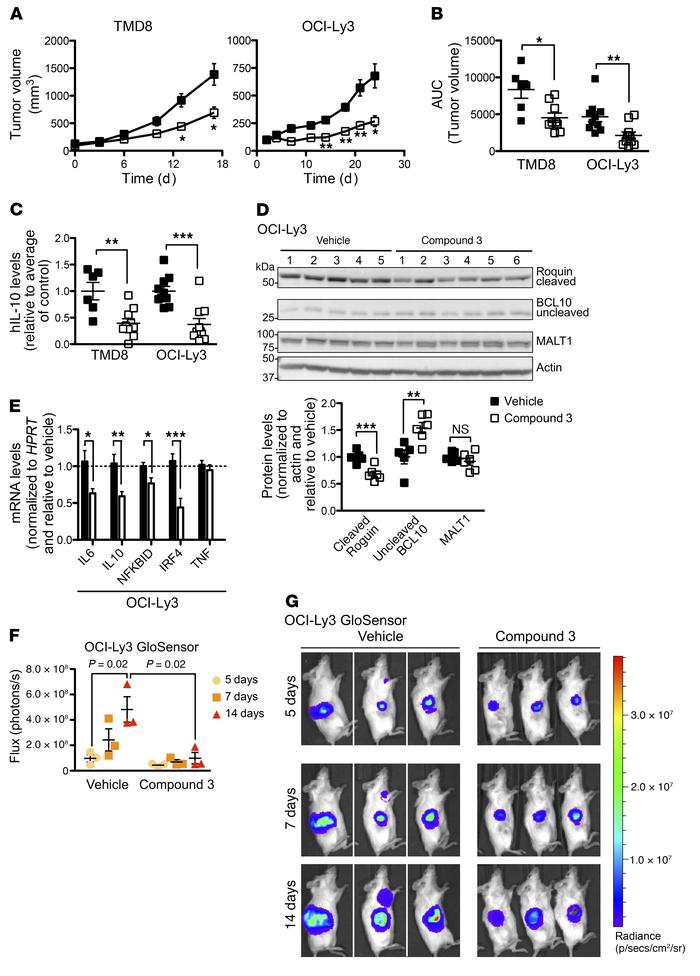 () Tumor growth curve for xenografts of the ABC DLBCL cell lines TMD8 (from NOD-SCID mice; = 9/group) and OCI-Ly3 (from NSG mice; = 10/group) following compound 3 treatment. Mice were treated with 30 mg/kg b.i.d. compound 3 or the same dose of vehicle for 16 or 24 consecutive days, respectively. () Tumor volumes for control- and compound 3–treated animals bearing TMD8 or OCI-Ly3 xenografts as indicated. The growth of each tumor was measured as the AUC. () hIL-10 serum levels at the endpoint of the experiment for TMD8 and OCI-Ly3 xenografts. () Western blot results for the MALT1 targets BCL10 and Roquin in OCI-Ly3–xenografted tumors. Graph shows quantification of the indicated genes normalized to actin and relative to vehicle. () mRNA levels for compound 3 targets in OCI-Ly3–xenografted tumors ( = 9/group). mRNA levels were normalized to and are relative to vehicle-treated cells at the indicated time points. () Live imaging of MALT1 proteolytic activity in xenografted OCI-Ly3 MALT1-GloSensor cells at the indicated time points. NSG mice were treated b.i.d. with 30 mg/kg as in . () Bioluminescence signal intensity quantification. Images are of mice used in the study. Data represent the mean ± SEM. * ≤ 0.05, ** ≤ 0.01, *** < 0.001 (–), and = 0.02 (), by unpaired, 2-tailed Student’s test.