Intestinal homeostasis depends on a slowly proliferating stem cell compartment in crypt cells, followed by rapid proliferation of committed progenitor cells in the transit amplifying (TA) compartment. The balance between proliferation and differentiation in intestinal stem cells (ISCs) is regulated by Wnt/β-catenin signaling, although the mechanism remains unclear. We previously targeted PORCN, an enzyme essential for all Wnt secretion, and demonstrated that stromal production of Wnts was required for intestinal homeostasis. Here, a PORCN inhibitor was used to acutely suppress Wnt signaling. Unexpectedly, the treatment induced an initial burst of proliferation in the stem cell compartment of the small intestine, due to conversion of ISCs into TA cells with a loss of intrinsic ISC self-renewal. This process involved MAPK pathway activation, as the proliferating cells in the base of the intestinal crypt contained phosphorylated ERK1/2, and a MEK inhibitor attenuated the proliferation of ISCs and their differentiation into TA cells. These findings suggest a role for Wnt signaling in suppressing the MAPK pathway at the crypt base to maintain a pool of ISCs. The interaction between Wnt and MAPK pathways in vivo has potential therapeutic applications in cancer and regenerative medicine.

Wnt inhibition upregulates MAPK signaling in the crypt base. 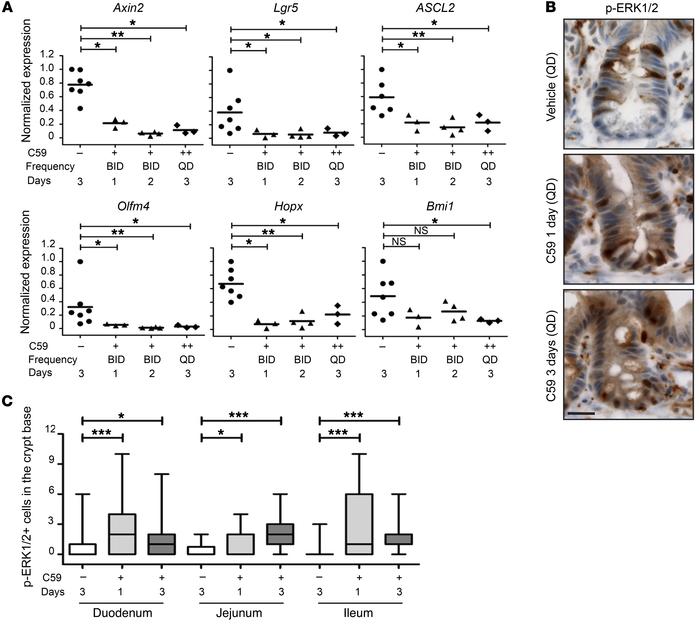