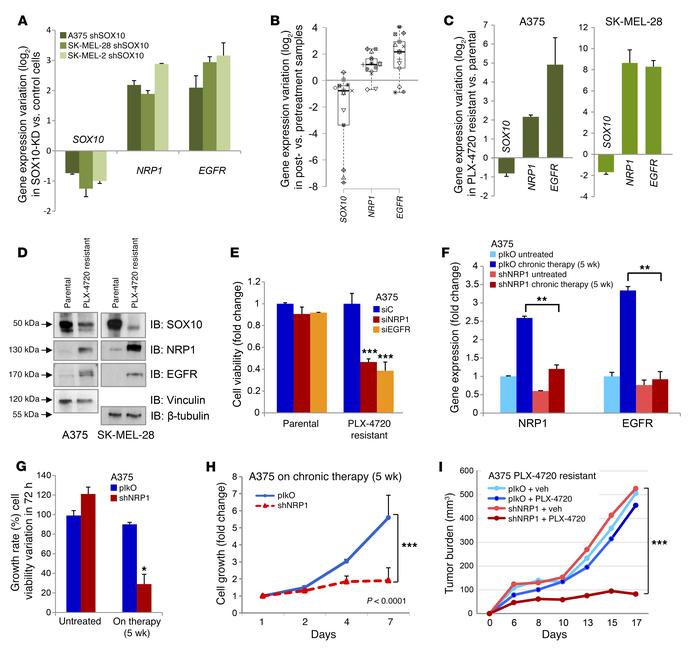 () Different melanoma cells were subjected to SOX10 knockdown (KD) by inducible shRNA expression, and , , and mRNA levels were analyzed by qPCR ( = 4). The graph shows log2 fold change variations in SOX10-KD cells versus respective controls. () Box plot showing , , and mRNA expression variations in 12 paired melanoma samples (indicated by different symbols) obtained from the same patients before and during treatment with BRAF inhibitors (log2 ratio treated/untreated). () qPCR analysis of , , and expression in A375 and SK-MEL-28 melanoma cells that developed acquired resistance to 2 μM PLX-4720 (log2 ratio drug resistant versus parental cells; = 3). () SOX10, NRP1, and EGFR protein expression in the same cells shown in ; vinculin and β-tubulin levels provided loading controls (1 representative experiment of 3 repetitions; duplicate samples were run on parallel gels for staining with different antibodies). () The viability of parental or drug-resistant A375 cells was assessed upon or KD with targeted siRNAs ( = 5). () A375 parental cells were subjected to KD (by targeted shRNAs) before exposure to escalating concentrations of PLX-4720 aimed at establishing drug resistance. and expression was analyzed after 5 weeks of treatment. The statistical analysis compared NRP1-KD samples with respective controls (carrying plkO empty vector) ( = 3). () The growth rate of control or NRP1-KD A375, either untreated or exposed to 0.5 μM PLX-4720 for 5 weeks, is scored as the percentage of increase of viable cells across 72 hours ( > 3). () The growth rate of control or NRP1-KD A375 cells on therapy with 0.5 μM PLX-4720 for 5 weeks was tracked in culture over 7 days ( > 3). () Mice implanted with either mock-transduced or NRP1-KD drug-resistant A375 cells were treated daily with 20 mg/kg PLX-4720 (or vehicle only), and the tumor burden was periodically measured. The statistical analysis compared treated tumors with respective controls ( = 5, per condition). For , , , statistical significance was determined using a Student’s test with Bonferroni’s correction (* < 0.01; ** < 0.001; *** < 0.0001); for and , a 2-way ANOVA test with Bonferroni’s correction was used (*** < 0.0001).